"A map of the most inhabited part of Virginia containing the whole province of Maryland with part of Pensilvania, New Jersey and North Carolina." Drawn by Joshua Fry & Peter Jefferson in 1751, published by Thos. Jefferys, London, 1755.

Fry and Jefferson based their map on firsthand surveys -- not, as was common at the time, on the word of other people who had traveled through the land. It accurately depicts the Allegeny Mountains and shows the route of "The Great Road from the Yadkin River thro Virginia to Philadelphia distant 455 Miles" -- what would come to be known as the Great Philadelphia Wagon Road. On their map, the road ends at Wachovia (Wachaw), the Moravian settlement. Also marked is the "Trading Path leading to the Catawba & Cherokee Indian Nations."

The cartouche in the bottom right corner of the map, designed by artist Francis Hayman, shows reveals a wharf scene in which a tobacco planter negotiates with a ship's captain. The Colonial Williamsburg Foundation notes:

Upon closer examination, one can see that the elaborate cartouche emphasizes Virginia's dependence on a tobacco economy based on chattel slavery. Because of the major rivers in the Chesapeake area, hogsheads of tobacco could be loaded by slaves directly from the wharves onto the ships, thus reducing additional costs of transporting the goods overland. This system of rivers and tributaries also allowed the larger plantation owners to negotiate with the ships' captains from their plantation docks. The laboring slaves represent the manpower required to cultivate the labor-intensive cash crop of Virginia. 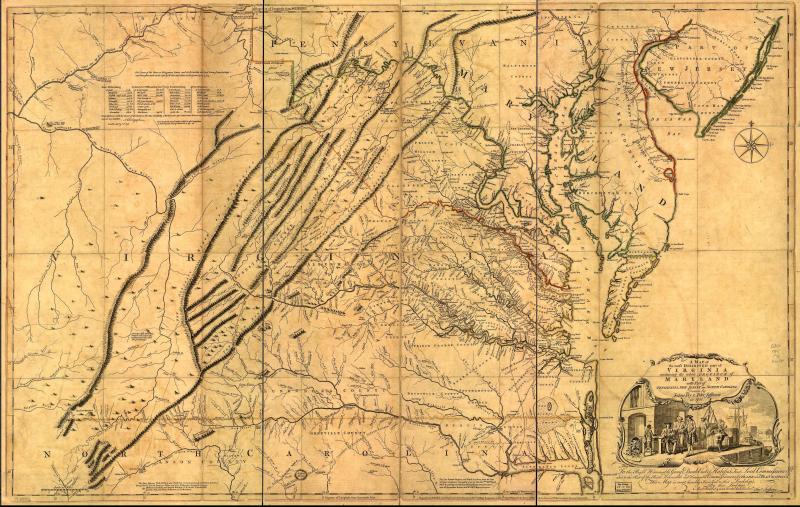