This map shows the original borders of the province of Carolina as defined by the 1663 Charter of Carolina (dark green) and the subsequent charter of 1665 (light green). Under the charter of 1663, the borders of Carolina are defined as all the land from 31ø to 36ø north latitude, from the Atlantic to the Pacific. In 1663, no one knew for certain just how far away the Pacific was, and no one in England had any immediate plans to find out, so this was a purely theoretical grant of land. In practice, the Lords Proprietors were granted land as far west as they could find men to colonize it. Carolina's boundaries were also determined by geographic features believed to be at the specified latitudes. The northern boundary is defined as the latitude of Lucke Island, in the "south Virginia seas" -- Albemarle Sound. Virginians had already settled Albemarle, and that settlement was left under the control of Virginia's governor. The southern boundary is also defined as the latitude of the mouth of the St. Matthias River, now called the St. Johns River, on the coast of Florida. The 31ø latitude line is actually a bit north of the current Georgia-Florida border, while the St. Johns River emerges near present-day Jacksonville, Florida. At the time, Spain controlled Florida, and Carolina was intended as a buffer against Spanish expansion in America. Georgia would be carved out of Carolina in 1733. (On this map, the line is drawn to match the location of the mouth of the St. Johns River, not the 31ø latitude line.) Two years later, the Carolina Charter of 1665 enlarged this grant, definining Carolina's northern boundary at "the north end of Currituck River or Inlet, upon a strait westerly line to Wyanoak Creek," or 36ø 30' (36 degrees 30 minutes, or 36 and one-half degrees) north latitude. The southern boundary was then defined as 29ø north latitude, which would place it in northern Florida. That northern line added the Albemarle settlement to Carolina and became the present-day border between North Carolina and Virginia, although it took several border disputes and attempts at surveying before everyone finally agreed on where, exactly, it was. 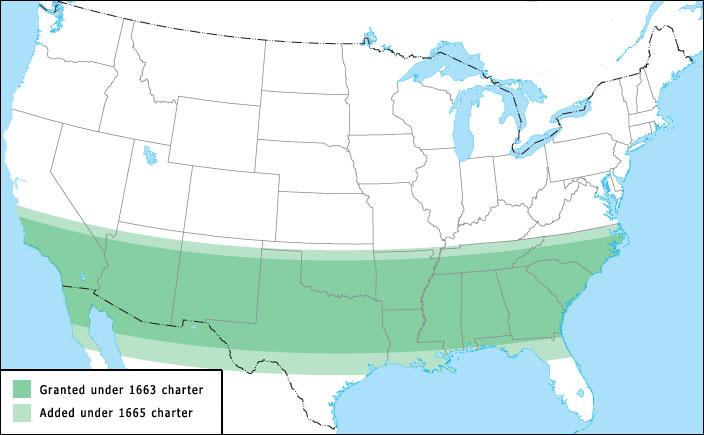