A carved stone lion statue stands on guard near a causeway over the huge water reservoir and moat surrounding Angkor Wat, the largest temple complex at the ancient city of Angkor.

Angkor Wat, like many Hindu and Buddhist Southeast Asian temples, was designed as a "mandala," a geometric design of a perfected world usually with square nested walls and passages leading past deity images towards a high central tower.

Water, with its life-giving and purifying qualities, is central to Khmer cosmology and all varieties of Hindu religion. The moats surrounding the temples of Angkor were envisioned as earthly models of the ocean that surrounds the world. A Sanskrit inscription compares the moats and reservoirs at Angkor with tributaries of the sacred Ganges River in India. Angkor was the royal capital of the Khmer empire from 802-1431 A.D. Angkor's long-lasting prosperity was based on the local abundance of three resources: water, fish, and the rice crops grown on soil nourished by annual rains, rivers, and controlled water reservoirs. The area's unique source of water is the "Great Lake," Tonlé Sap, which connects to the Mekong River and multiplies in size after the annual monsoon rains.

These natural resources allowed the Khmer population at Angkor to reach an estimated one million inhabitants. The "footprint" of Angkor's stone monuments spans about eighteen by eight miles. During its peak, Angkor's influence extended far, into what are now Vietnam, Laos, Thailand, Burma, and Malaysia. The ruler who oversaw the building of Angkor Wat was Suryavarman II. He ruled the Khmer empire by 1113 A.D. and began an ambitious building and imperial expansion project. Angkor Wat's stone buildings, built within nested square walls, took over thirty years to complete.

The sandstone for Angkor's temples was quarried from a mountain range some twenty miles northeast of the royal city. The task of transporting the stones would have been enormous, involving weights comparable to the construction of the larger pyramids in Egypt. The stones used were carefully "dressed" so that they would fit together perfectly without the use of mortar.

Despite their brilliance as stone carvers, the Khmer never mastered the engineering principles of staggered block joints and vaulted arches, as used by the Egyptians and Romans. Instead, the Khmer often piled stones directly on top of each other so the joints lined up, and later split apart easily. They also built "corbel" or "false" arches above walls, which did not distribute the stones' weight well. Such building practices led to a more rapid crumbling of Khmer stone structures over time. The Angkor Wat complex was designed as an earthly model of Mount Meru, home of the Hindu god Vishnu. Mount Meru's five peaks are conceived as surrounded by mountain ranges and oceans, represented architecturally by the outer walls and moats. At Angkor Wat, the sacred monuments rise in tiers toward the center tower, with higher towers at every corner of the concentric squares.

The fact that the main central tower of Angkor Wat faces west, symbolizing death in Southeast Asia, when virtually all other Khmer temples face east to the rising sun, has suggested the idea that Suryavarman II intended the monument to be his tomb as well as a temple. Other scholars have suggested that the western orientation is connected with the temple's dedication to Vishnu, or with astronomical measurements designed into the temple complex.

Classical Khmer kings promoted the idea (known as "devaraja") that there was an intersection of the ruling king and a validating god. Usually the Hindu god chosen for this personal identification was Siva, but sometimes it was Vishnu, or even a godly image of Buddha or Buddhist saints. Khmer temples often portray the ruling king incarnated as the favored god, whose shrines are within a monument on earth that models the design of the cosmos and heavens.

Bas-relief carvings on the central temple walls at Angkor Wat illustrate scenes from the Mahabharata and Ramayana, two epic tales from India that were important to classical kingdoms, philosophy, and art throughout Southeast Asia. Both epics include heroes, such as Rama and Krishna, who are earthly incarnations of the Hindu god Vishnu, as well as animal deities such as Garuda (a bird) and Hanuman (a monkey).

Angkor Wat is also famous for its bas-relief sculptures of dancing female divinities (each called an apsaras) created for the entertainment of the Hindu gods. These female deities, who wear pointed crowns, are often depicted in dance poses.

In contrast to the intricately carved outer wall, the interiors of the stone temples are usually bare. Small holes on some walls along with inscriptions describing the grandeur of Angkor, suggest the idea that there originally were interior murals, possibly of bronze, which long ago were removed and re-forged. When the French assumed rule over the Angkor area in the late 1800s, they marvelled at the ruins and debated their origins. Many of the puzzles were solved by translating inscriptions on stone slabs at Angkor, and other stones resting as far away as Laos.

The stone inscriptions, written either in the ancient Indian language of Sanskrit or in an old form of Khmer transcribed with a Sanskritic form of writing, describe the accomplishments of Khmer kings during their reigns, royal accounting practices, rice production, and even the amount of medicines used in imperial hospitals. Apparently the human dwellings at Angkor, even those of the kings, were made of wood and they perished long before the remaining stone temples.

Ultimately, it was the ascending Siamese kingdom, based in what is now Thailand, that sacked Angkor in 1431 and ended the kingdom's regional power.

Although the Angkor Wat site originally was dedicated to the Hindu God Vishnu and most of its images are from Hindu scriptures, the temple later became used as a shrine for Theravada Buddhists. Theravada Buddhism is the dominant religion among the contemporary Khmer people of Cambodia (as well as majorities in Thailand and Burma) although it is influenced by earlier local ideas and practices, as well as the Hindu antecedents of Buddhism. 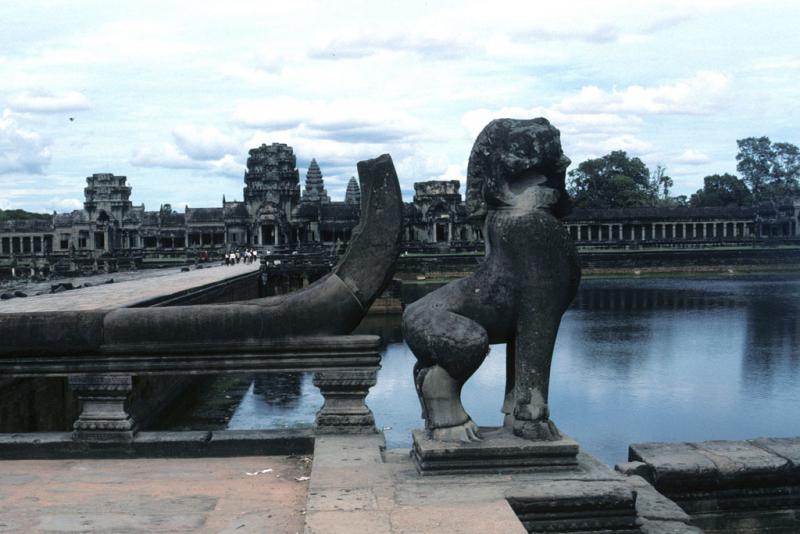