Sequential images of Hanuman looking for Sita in the demon Ravana's palace are seen on a Ramayana mural at the Emerald Buddha Temple. The two adjacent images illustrate how framed space is used to indicate time lapses in Thai temple mural paintings. Hanuman, the white monkey god, appears in two different rooms, seemingly at once. When the viewer moves from left to right to view the painted scenes, however, the understanding intended is that Hanuman first checked the left room for Sita, and then the right room. The right image also is painted as if it were slightly in front of the left one, overlapping it, and thereby leaving it behind in the past. In a sense, the murals move to the right much like a comic book or a slow motion version of film movies where one image follows another to convey the plot action and passage of time.

Also of interest here is the way the demons' bedrooms are depicted. The two fierce demons are both asleep facing front with their top arms around beautiful women partners. Lavishly clothed and crowned, the demons and their female consorts sleep side-by-side with their heads on wedge-shaped pillows. The couples are sleeping on cloth-covered platforms.

In the Ramayana story, when Hanuman does not find Sita hidden in these demon bedrooms, he moves on to hunt for her elsewhere on Ravana's island of Lanka. He will find her hidden in the forest. 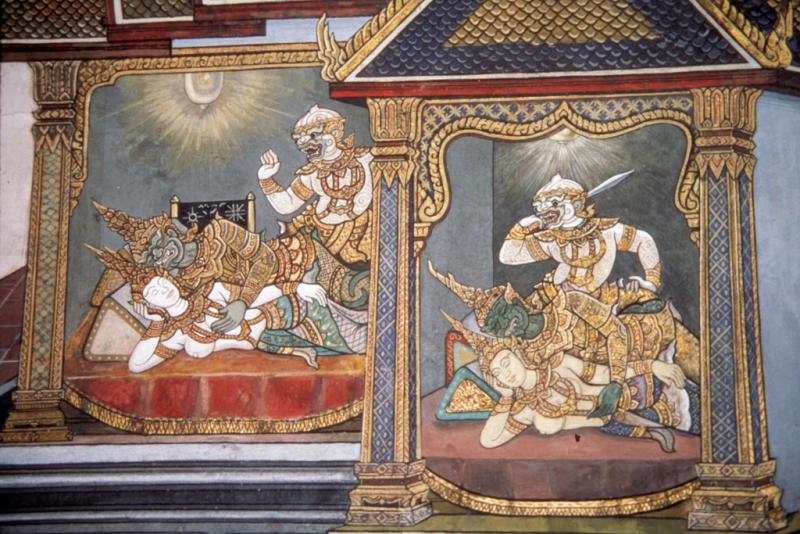