Rama and his court watch Sita during the fire ordeal, as seen on a mural at the Emerald Buddha Temple. Sita stands calmly in a gated area with flames burning around the lotus blossom platform on which she stands. One of the monkey kings lights the fire with a torch in front, while Rama and his courtiers watch the spectacle from a royal pavillion at right.

After being separated from Sita for many years during her capture by Ravana, Rama is unsure of his wife’s fidelity. In order to prove that she has been faithful, Sita willingly undergoes an ordeal, or trial by fire.

In ancient South Asia, Southeast Asia, and Europe (not to mention colonial America), it was thought that the innocence of an accused criminal could be proven if they survived some kind of extreme physical torture such as burning or drowning.

In some versions of the Ramayana, it is said that lotus flowers sprouted at Sita’s feet to protect her from the fire, or that not a flower petal in her hair was faded by the fire because the gods, who knew she was pure of heart, protected her completely.

In contemporary Southeast Asian fiction, the story of Rama and Sita is often retold to highlight a double standard for men versus women: that women are supposed to prove their faithfulness to men, but the behavior of absent men is never questioned. Some contemporary Southeast Asian women dislike the character of Rama, seeing him less as a hero whose valor should be modelled by men today than an old-fashioned man who did not treat his innocent wife properly when she returned to him. 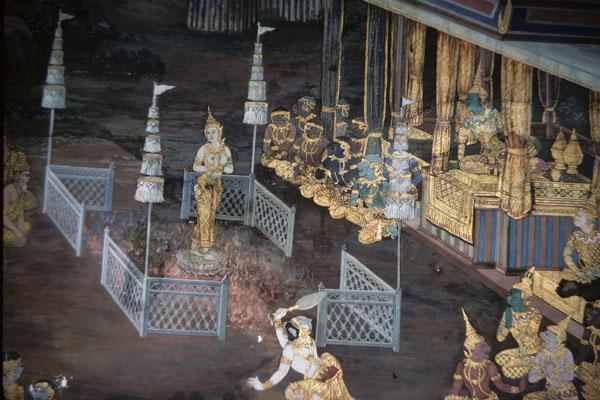