To know where the Sign is.
First Find the Day of the Month, and against the Day
you have the Sign or Place of the Moon in the 5th Co-
lumn. Then finding the Sign here, it shews the Part of the Body it governs.

Courteous Reader,
This is the twentieth Time of my Addressing thee in this
Manner, and I have reason to flatter myself my Labours have
not been unacceptable to the Publick. I am particularly
pleas’d to understand that my Predictions of the Weather give such
general satisfaction; and indeed, such Car is taken in the Calcu-
lations, on which those Predictions are founded, that I could almost
venture to say there’s not a single One of them, promising Snow,
Rain, Hail, Heat, Frost, Fogs, Winds, or Thunder, but what comes
to pass punctually and precisely on the Day, in some Place or
other on this little diminutive Globe of ours; (and when you consider
the vast Distance of the Stars from whence we take our Aim, you
must allow it no small Degree of Exactness to hit any Part of it) I
say on this Globe; for tho’ in other Matters I confine the Usefulness
of my Ephemeris to the Northern Colonies, yet in that important
matter of the Weather, which is of such general Concern, I would
have it more extensively useful, and therefore take in both Hemi- spheres, and all Latitudes from Hudson’s Bay to Cape Horn.

You will find this Almanack in my former Method, only con-
formable to the New stile established by the Act of Parliament,
which I gave you in my last at length; the new Act once made for
Amendment of the fist Act, not affecting us in the least, being
Intended only to regulate the Corporation Matters in England, be-
fore unprovided for. I have only added a Column in the Second Page
of each month, containing the Days of the Old Stile opposite
to their corresponding Days in the New, which may, in many Cases,
be of Use; and so conclude (believing you will excuse a
short preface, when it is to make Room for something better)

Thy Friend and Servant
R. Saunders.

Hymn to the Creator, from Psalm CIV.
Awake, my Soul! With joy they God adore;
Declare his Greatness; celebrate his Pow’r;
Who, cloath’d with Honour, and with Glory crown’d,
Shines forth, and cheers his Universe around.
Who with a radiant Veil of heavenly Light
Himself conceals from all created Sight.
Who rais’d the spacious Firmament on high,
And spread the azure Curtain of the Sky.
Whose awful Throne Heav’n’s starry Arch sustains,
Whose presence not Heav’n’s vast Expanse restrains
Whose Ways unsearchable no Eye can find,
The clouds his Chariot, and his Wings the Wind.
Whom Hosts of mighty Angels own their Lord,
And flaming Seraphim fulfil his Word.
Whose Pow’r of old the solid Earth did sound,
Self-pois’d, self-center’d, and with Strength grit round; 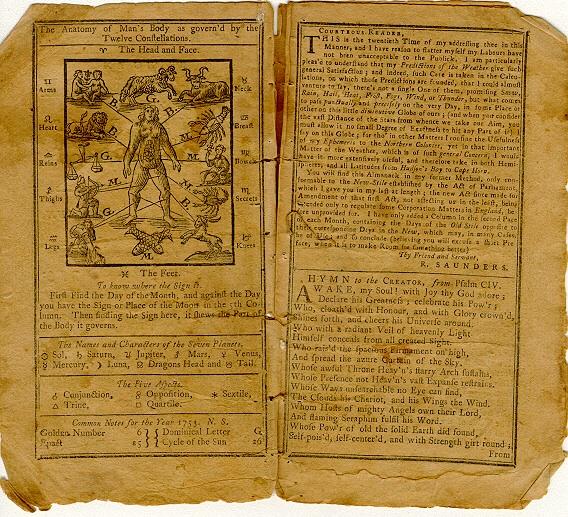