For over two centuries, the Sappony living in High Plains grew tobacco as a primary subsistence crop. This, along with their Indian church and school, allowed the community to remain self-sufficient.The Tribal insignia features a tobacco leaf because of its importance to the tribe. Because tobacco was a primary subsistence crop, and therefore of primary importance to the Tribe, the Sappony placed a tobacco leaf in the center of their Tribal insignia.The insignia also shows corn and wheat, which flank the tobacco leaf. Corn and wheat were two other crops that, along with tobacco, formed the base of Sappony subsistence. Farming families in the community worked together to ready the fields, plant, maintain and harvest crops.The Sappony are a community descended from, and still formed of, seven main families: Coleman, Epps, Johnson, Martin, Shepherd, Stewart/Stuart and Talley. The seven stars in the upper part of the insignia represent the seven families, or clans, watched over by God. The seven feathers also represent the seven families, tied together, in work, worship, education and by blood.In colonial days, tribes were given symbols so that the colonials could tell them apart from a distance and tell which tribes were friendly with the colonists (and therefore safe to approach) and which participated with the colonists in particular skills such as trading, guiding or tracking. The three arrowheads are the historical Sappony trading symbol with the colonists. The symbols may have been tattooed onto the back of the shoulder or worn around the neck. 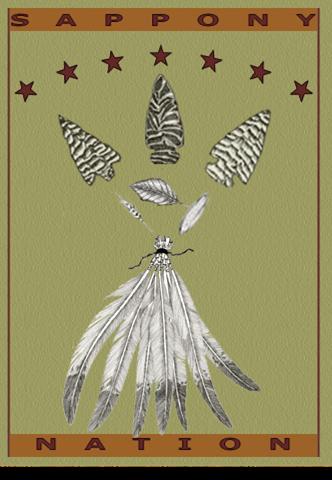