A political cartoon, drawn circa 1861, depicts southern secession. The cartoon shows Florida, Alabama, Mississippi, and Louisiana as men riding donkeys, following South Carolina's lead toward a cliff. The rider carrying the Georgia flag rides down a hill, saying, "We have some doubts about 'the end' of that road and think it expedient to deviate a little."

South Carolina rides a pig and reaches a butterfly "Secession Humbug," saying, "We go the whole hog. -- Old Hickory [Andrew Jackson] is dead, and now we'll have it." Florida, just behind South Carolina, shouts, "Go it Carolina! we are the boys to 'wreck' the Union." Next follows Alabama, who declares, "We go it blind, Cotton is King!'" Mississippi says, "Down with the Union! Missippi 'repudiates her bonds.'" The last rider is Louisiana, who says, "Go it boys! We'll soon taste the 'sweets' of secession," a reference to the state's domination of the sugar trade.

The reference to Jackson refers to the nullification crisis of the 1830s, in which South Carolina threatened to secede if President Jackson tried to enforce federal tariffs in the state. 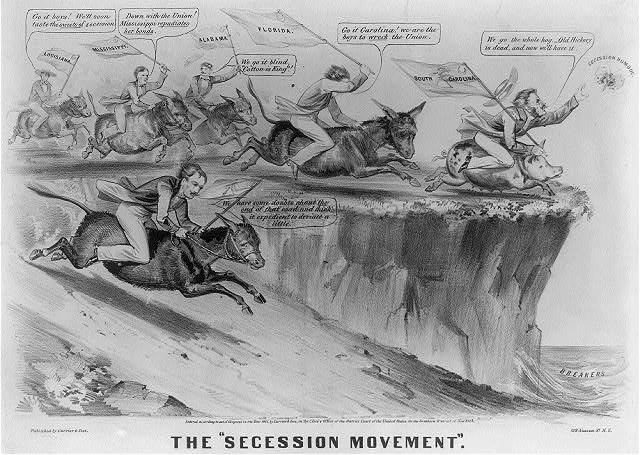