This engraving was published in the Illustrated London News in December 1863, illustrated by Frank Vizetelly. Depicted is the planation owner, his family, and slaves listening to an older slave preaching. The preaching slave could read, but not write. The chapel that the mass is being held in was built for the slaves of the plantation, hence the bareness. Also note the division between the master, his son, and wife and daughter. The master is closer to his slaves, his property. But, there is also space on the bench, which could imply separation between him and his slaves. His son is framed by the table and preaching slave, perhaps emphasizing his role as heir to the plantation. The slaves express ranging amounts of engagement; some are visibly tired, others are intent on the older slaves words. The preaching slave strikes a classical orator pose with his hand in the air with a couple figures sticking out. The wife and daughter are the perimeter of engraving, maybe hinting to her minor role in the plantation.

Below the "Family Worship" is an engraving titled "The War in America: The Federals Shelling the City of Charleston.--Shell Bursting in the Streets." Why do you think these two engravings were placed on the same page? Also, why would Great Britain be interested in the American South during the American Civil War? Who do you think read the Illustrated London News? Aristocracy? Middle class? Lower class?

Sandra J. Still and Emily Katt. "Figure- Family Worship in a Plantation in Suth Carolina. -- See Page 574; The War in America: The Federals Shelling the City of Charleston.--Shell Bursting in the Streets. -- From a Sketch by Our Special Artist. -- See Page 574."The Civil War in America from The Illustrated London News. Emory University: Collection Management, and the Beck Center. Accessed November 2, 2018. http://iln.digitalscholarship.emory.edu/illustrationlarge/v43p561.jpg/

If you would like to see the whole December 5, 1863 newspaper issue go to (unfortunately you will not be able to see close ups of the articles): 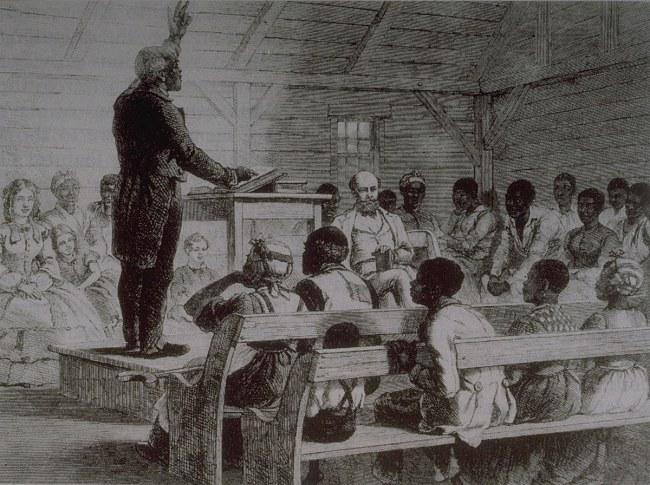 Read the related article:
Civil War and Reconstruction (1860-1876)
The Life of a Slave
Usage Statement: