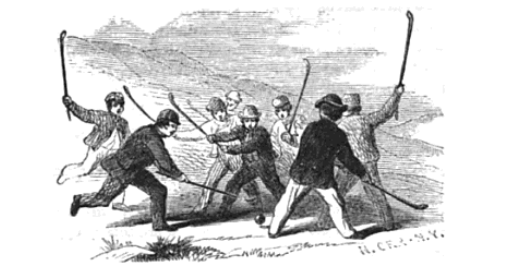 Bandy was a popular sport on North Carolina's college and school campuses prior to the Civil War. The sport, which closely resembled modern field hockey, featured two teams of varying numbers using a curved stick to knock a ball into a goal. The likelihood of a player having his shins hit with the stick led to an alternate name for the sport: "shinny." It was unorganized, without the printed rules, designated teams, or other features of modern sports that developed after the end of the war in such campus sports as baseball and football. The popularity of the latter sports resulted in the decline of bandy.

One particularly good description of an antebellum bandy contest came from J. R. Cole, a student at Trinity College (later Duke University). Describing games involving as many as 40 students, Cole wrote: "as the big hard ball is thrown up or down, see them rush up to it with uplifted clubs, and strike right and left crying 'shin on your side' and see them jump into the air to avoid a savage blow, and the ball is knocked whirlin, and all rush for it, and sticks fly, and hands are hurt, and limbs are bruised, and heads are struck." Not surprisingly, bandy did not meet with much favor with school officials across the state. Occasional attempts were made to ban the activity.

Rules of Shinny in the American Boys Book of Sports and Games (1864) [p. 104-105]: http://books.google.com/books?id=x5UMAAAAYAAJ&printsec=frontcover&source=gbs_ge_summary_r&cad=0#v=onepage&q&f=false