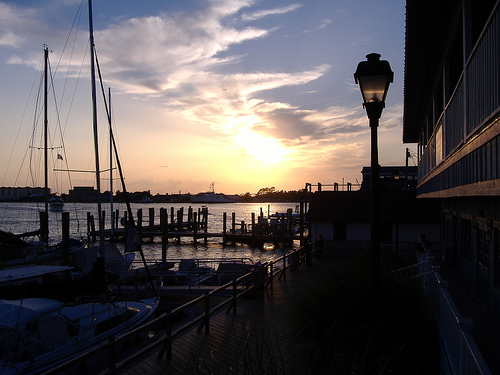 Claimed by some to be the last engagement of the Revolutionary War, the Battle of Beaufort took place as a result of a British raid on the town in April 1782. The surrender of Lord Charles Cornwallis's British army at Yorktown in October 1781 had brought an end to major military operations in the war, and treaty negotiations were under way to conclude it. But the British continued to hold New York, Charles Towne (present-day Charleston), and Savannah, and their navy's ships continued to operate out of these ports. In late March 1782 four vessels led by Cdr. D. McLean left Charleston for the North Carolina coast to take prizes and capture a quantity of public stores believed to be in Beaufort. On 4 April the British fleet entered Beaufort Harbor without identifying itself and seized all of the pilots and townspeople who went out to greet the ships. In the early morning hours of 5 April, a landing party commanded by Maj. Isaac Stuart rowed ashore and captured Beaufort itself, driving off the handful of local militia who had turned out under Col. John Easton. The British spent the next five days plundering the town and skirmishing with local militiamen, who had begun to gather in increasing force from neighboring communities.

In the Beaufort fighting the British had lost one man killed, a few wounded, and a number captured. On 10 April they returned to their ships but remained in the harbor. During that time their attempts to land on adjacent Bogue and Shackleford Banks for water were repulsed by the militia. After an exchange of prisoners, the British fleet finally departed on the afternoon of 17 April and the threat was ended. The raid spawned fears that the British might be encouraged to launch other expeditions against more promising areas such as New Bern and Edenton, but this was not the case. In November 1782 initial articles of peace were signed between the United States, its allies, and Great Britain, followed by the formal treaty of peace on 3 Sept. 1783 that recognized American independence.

Thank you for the important

Thank you for the important historical details and N.C. participation in achieving our independence.