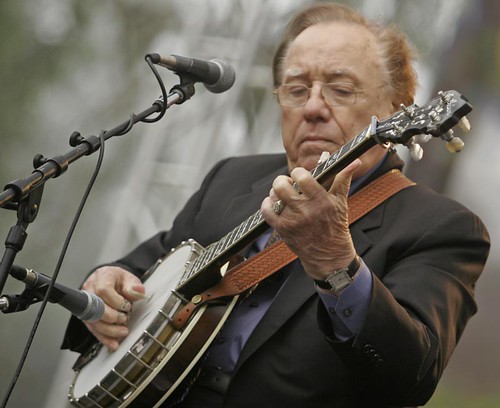 He was born in the Flint Hill community near Shelby, N.C. on January 6, 1924. His father, mother, and four brothers all played musical instruments. By his early teens he was playing local dances. He attended high school in nearby Boiling Springs. In 1939, he played with a group called the Morris Brothers before leaving to look after his mother and work in the textile mills during World War II.

Scruggs' musical career took off in 1945 when he joined bluegrass legend Bill Monroe's Blue Grass Boys band. Bill Monroe had done for the mandolin what Scruggs did for the banjo: he changed the way a previously neglected instrument was viewed through innovative technique and virtuosity. Scruggs elevated the banjo from a rhythm instrument to a lead instrument through his particular three finger picking style, now called the Scruggs style.

Tired of the grueling tour schedule, Scruggs quit the Blue Grass Boys in 1948 and formed a band, The Foggy Mountain Boys, with his fellow bandmate, Lester Flatt. On April 18, 1948, Earl Scruggs married bookkeeper Louise Certain, who became the group's manager and agent in 1956. The Foggy Mountain Boys were very successful, playing a number of radio stations, and recording for both Mercury and Columbia Records. The first country act to have their own syndicated television series, The Flatt and Scruggs Grand Ole Opry Show ran from 1955 until the duo broke up in 1969.

In 1962, The Beverly Hillbillies debuted on television. Flatt and Scruggs performed the theme song, "The Ballad of Jed Clampett," with vocals by Jerry Scoggins. The single version went to number one on the country charts and was nominated for a Grammy award for Best Folk recording in 1963. Flatt and Scruggs made a number of appearances on the popular sitcom as themselves, playing friends of the fictional Clampett clan.

Another high point in the group's popularity came with the use of the Foggy Mountain Boys' 1949 recording of the instrumental "Foggy Mountain Breakdown," in the 1967 movie Bonnie and Clyde. The song gained new popularity, and a re-recording won a 1969 Grammy award for Best Country Performance. Flatt and Scruggs parted ways in 1969 over artistic differences. Scruggs wanted to experiment, while Flatt was a traditionalist. Scruggs then formed the Earl Scruggs Revue with his three sons, Gary, Randy, and Steve.

Scruggs also wrote an instructional book, Earl Scruggs and the Five String Banjo, published in 1968. He also composed the score of the 1973 film, Where the Lilies Bloom.

Despite occasional health setbacks, Scruggs continued to play. He was first sidelined after a 1955 car crash required hip surgery. In 1975, a small airplane Scruggs was piloting crashed, requiring wrist surgery. In 1980, severe back problems restricted his touring, and in 1996, he required sextuple bypass surgery, further limiting his touring abilities. Yet Scruggs was recording and performing up until his death at age 88 on March 28, 2012, at a Nashville, Tennessee hospital of natural causes.