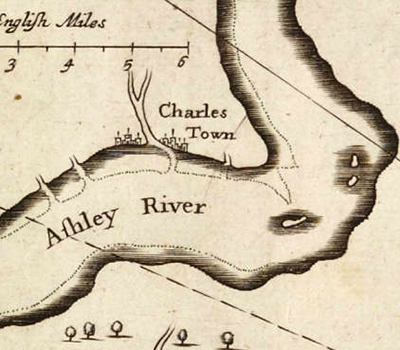 Charles Towne on the Cape Fear River was the first overseas effort to colonize the Carolinas after the 1663 Carolina grant from Charles II to the eight Lords Proprietors. As early as 1662, William Hilton had explored the Cape Fear River (briefly called the Charles River) for the Adventurers about Cape Fayre, a group of Puritans from the Massachusetts Bay Colony. Following Hilton's favorable report, the Puritans sent a colonizing expedition early in 1663 that remained only a short time.

Meanwhile on Barbados, which was already plagued by overcrowding, the Corporation of Barbadian Adventurers petitioned the Lords Proprietors for permission to settle in Carolina. Hilton, having shifted his base to the Caribbean colony, set forth again in August 1663 for the Carolina coast. Although there was greater interest in the more southerly Port Royal Sound area, on 29 May 1664 John Vassall landed a colony of Barbadians and possibly a few New Englanders on the Cape Fear, founding Charles Towne. The settlement was included in the newly formed Clarendon County, with Sir John Yeamans of Barbados as governor and Vassall as deputy governor. The two earliest governmental documents for Carolina, the Declaration and Proposals of 1663 and the Concessions and Agreement of 1665, were developed essentially for the promotion and governance of Charles Towne.

A fortified compound was established on the east side of the river just upstream from the mouth of Old Town Creek. The colony grew rapidly, and by 1666 it was described as containing some 800 inhabitants scattered up and down the river on individual homesteads, producing agricultural products for export primarily to Barbados. With increased interest for settling further south, Charles Towne became a base for exploratory voyages of the southern coast.

In the fall of 1665, Sir John Yeamans arrived in the settlement en route to a second colony in the Port Royal region, but his plans foundered in an untimely shipwreck at Cape Fear in which most of the public supplies were lost. England's loss of interest and lack of support, resulting from problems at home and a war with the Dutch, coupled with internal dissension, prompted most of the settlers to drift away. By the fall of 1667 Vassall wrote that the colony had been abandoned. In spite of the failure, many Barbadians involved in the Cape Fear colony became the driving force behind the founding of the second Charles Towne in southern Carolina in 1670 (modern-day Charleston, S.C.). Charles Towne on the Cape Fear is significant as the first Proprietary colonizing experience, as the first overseas expansion of the Caribbean to the mainland, and as the predecessor of the second and longer-lived Charles Towne.