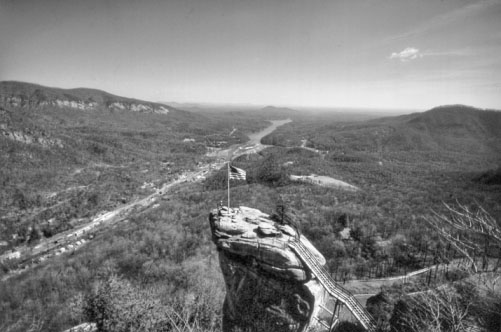 Chimney Rock is a monolith rising 225 feet from the surrounding mountainside and overlooking Hickory Nut Gorge and Lake Lure in western Rutherford County. The American Indians of the region used it as a landmark for many years, and it is believed that explorer Hernando De Soto passed through the gorge and became the first European to view the monolith in 1539. Locals claim that Chimney Rock also served as a marker on an Underground Railroad line through the area before the Civil War. Between January and mid-summer 1874, shocks from an apparent earthquake disturbed the area, causing many citizens to move from the valley in fear that the rock and mountains might collapse. It was determined later that the shocks were of the nature of volcanic disturbances.

The first development of Chimney Rock as a tourist attraction came in July 1916, when Lucius B. Morse built a stairway to the top and a series of trails leading to nearby points of interest, including Hickory Nut Falls, the state's tallest waterfall. Three years later he opened the Cliff Dwellers' Inn, which was replaced by the Sky Lounge in 1949. That year, an elevator was opened to make Chimney Rock more accessible. For a number of years, an annual "hill climb" to the top of the rock was held.

In 1922 Morse conceived of the idea of building a large summer resort in the valley below the rock. After putting his plan before a number of Rutherford County area businessmen, he incorporated the enterprise as Chimney Rock Mountains, Inc., capitalized at $4 million, the largest corporation granted charter in North Carolina up to that time. The corporation secured option on approximately 8,000 acres of land and began the construction of a dam and powerhouse. The dam was completed in 1926, and the resultant body of water, Lake Lure, with a 27-mile shoreline, complemented the recreational facilities of the Hickory Nut Gorge. At the same time, the state began to build a new highway, N.C. 20 (later U.S. 64-74) through the gorge, and the Lake Lure Inn was opened, making the Chimney Rock-Lake Lure region one of the state's major tourist areas.