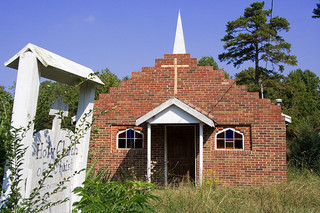 Churches of Christ are theologically conservative congregational churches bound together by association rather than a formal denominational structure. These churches resulted from the so-called restoration movement of the early nineteenth century. This movement was led by James O'Kelly in North Carolina and Virginia, Barton Stone in Kentucky, and Thomas and Alexander Campbell in West Virginia. Together these men sought primarily to promote scripture, particularly the New Testament, as the only source of truth among the faithful. Secondarily, they hoped to achieve individual church liberty and a union of similarly believing churches. The Churches of Christ pattern their organization and their form of worship upon an interpretation of the early Christian church. Services are simple, with the choir singing without instrumental accompaniment. The Lord's Supper is held weekly, believer baptism is by immersion, and members are expected to have a strong prayer and preaching commitment.