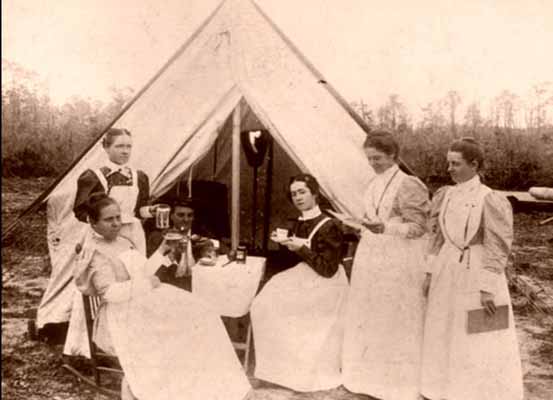 Prior to the Civil War, nursing had not yet established itself as an institution. The Civil War revolutionized nursing and provided women with an opportunity to contribute during the war. The Civil War  influenced the development of healthcare, and as a result of increased health needs during the war, many new institutions and organizations were formed. North Carolina was lacking in its healthcare in comparison to other states. At the start of the war in 1861, North Carolina did not have a single general hospital, much less trained nurses or other health professionals. However, as the war progressed, so did healthcare in North Carolina.

The causalities during the Civil War over 600,000 with approximately 10 million cases of illnesses, significantly higher than any other American war. Soldiers died on the battlefield from hemorrhaging caused by gunshot or sword wounds and many others died later due to infection and disease from the lack of proper care of their wounds. Thus, it is easy to see how the war influenced the need for patient care and the growth of nursing.

The lack of immediate medical attention available to soldiers on the battlefield inspired women across the country to get involved and help save lives. Women in North Carolina formed groups among themselves and used every resource possible to aid the soldiers. These women were known for using makeshift buildings with inadequate equipment and homemade supplies.  They also relied on folk remedies and Nightingale’s Notes on Nursing. These ladies risked their own wellbeing by going onto the battlefield to help injured soldiers.

Nurses were also responsible for taking care of those who had become injured or sick because of the war and who needed around-the-clock long-term care. An excerpt from Margaret Elizabeth Clewell’s (Salem, NC) firsthand account of volunteer nursing in its early days reads:

I remember that day September 19, 1861, when I left Salem with a party of volunteer nurses to go to Virginia where the 21st North Carolina Regiment was in camp.…We were given the use of a fine old Virginia Home, which we soon made as comfortable as possible and as many sick soldiers were brought in as the house could hold. We had carried many things with us, knowing we could get nothing in the way of supplies when we reached the camp.

Other organized groups such as the Soldier’s Aid Society and the Ladies Hospital Association were founded during this era as well. Soldier’s Aid Society sent food, clothing, and medical supplies to battlefield hospitals. North Carolina nurses like Sallie Chapman Gordon Low and Jane Renwick Smedburg Wilkes played major roles in the development of nursing during the Civil War. Low, a native of Wilkes County, was the first documented nurse of the confederacy.  Wilkes was one of the first ladies to volunteer as a nurse at Wayside hospital and the Confederate Military Hospital in Charlotte, NC, and she headed efforts to establish Good Samaritan Hospital in Charlotte, the first privately owned hospital for African Americans in the state. Wilkes, along with other several other women, founded the Ladies Hospital Association.

The war brought about many positive changes to healthcare and medicine, increasing the awareness for the need of more medical institutions and trained professionals. By the close of the war, 13 general hospitals had been formed in North Carolina.  An 1862 notice from Rowan Way-Side Hospital out of Salisbury, stated, “This Hospital has been established one month and during that period it has given accommodations to one hundred and thirty-four soldiers. Of this number, 87 were wounded and 47 sick.” The notice asked for funding from the county in order to keep the hospital running ”in a proper manner.”

The establishment of these hospitals was a giant leap forward in medical care and provided many benefits. The hospitals provided access to healthcare to those in need of medical attention, benefitting the surrounding community as a whole. Building hospitals also opened up job opportunities. An early example of creating job opportunities was exhibited when the Confederate Congress passed legislation in 1862 designating positions for women in military hospitals and paying monthly wages.

Increasing job opportunities in the hospital not only led to economic growth, it increased the demand for education and training. This ultimately led to the development of accreditation and the establishment of more schools centered toward medicine. The healthcare needs created by the Civil War played a role in creating positive changes in North Carolina as its citizens took responsibility for managing those needs.