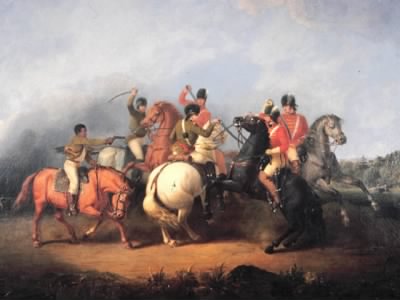 The Battle of Cowpens took place on 17 Jan. 1781 near Spartanburg, S.C. To reverse the appalling pattern of defeat in the South during the American Revolution, Gen. George Washington appointed Gen. Nathanael Greene, an energetic and trusted lieutenant, as southern commander. Greene assumed the post in North Carolina on 2 Dec. 1780 and promptly and audaciously divided his meager force (2,300 infantry, 1,500 present and fit for duty), sending Brig. Gen. Daniel Morgan with about 1,000 men into western South Carolina to possibly draw Cornwallis's forces there. Cornwallis countered by dividing his own army, sending Lt. Col. Banastre Tarleton to find and crush Morgan. Tarleton, the "Red Raider," whose name was synonymous with ruthlessness, set out with about 1,100 troops, most of whom were experienced and disciplined regulars. Tarleton pushed his men hard, intending to catch Morgan's apparently ragtag column before it could receive reinforcements or cross the Broad River.

As Tarleton closed in, Morgan had little choice but to stand and fight. On 16 Jan. 1781 he carefully chose his battleground and arrayed his troops, placing sharpshooters in a "skirmishing line" in front and his remaining forces behind in "progressively stronger" lines. The ensuing battle the next day featured both ferocious fighting by the Americans and tactical brilliance by their leader Morgan, whose creative deployment of his troops surprised and withered the British assault. By battle's end, Tarleton saw his force soundly defeated. Casualty figures vary among sources, but reasonable estimates of British losses include more than 850 soldiers and officers killed, wounded, or captured-a devastating percentage of Tarleton's total forces. American casualty numbers also vary but were undoubtedly far fewer, with estimates as low as 12 killed and 60 wounded.

The fight at Cowpens was truly a disaster for Cornwallis, depriving him of his best light infantry and cavalry and thus seriously weakening the force with which he intended to invade North Carolina. Daniel Morgan became an instant American hero and was awarded a gold medal by the U.S. Congress. His victory at Cowpens breathed confidence into the Carolinas and provided the first link in what would become a final chain of events leading to Cornwallis's ultimate defeat at Yorktown, Va.

Battle of Cowpen, painted by William Ranney in 1845. Image courtesy of the National Park Service. Available from https://www.nps.gov/cowp/forteachers/unit-7-the-battle-the-human-element.htm (accessed June 1, 2012).