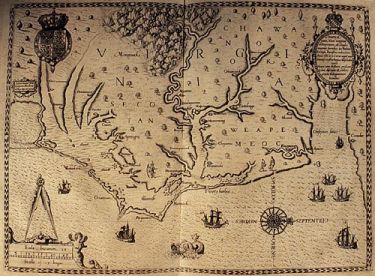 The Croatoan Indians were a tribal group of Carolina Algonquians who probably inhabited both present-day Hatteras and Ocracoke Islands at the time of the arrival of the English explorers and colonists sent by Sir Walter Raleigh in the 1580s. Also called the Croatan, and later known as the Hatteras Indians, they were recognized as a distinct tribal group until the second half of the eighteenth century. Although they hunted and fished all along the northern Outer Banks and in its surrounding waters, their fields and towns were originally located on the forested sound side of Hatteras Island between modern-day Buxton and Hatteras. Theodore de Bry's 1590 map of Raleigh's Virginia showed three village symbols on Croatoan Island, now roughly the part of Hatteras Island that runs east to west. It is possible that the Croatoan also had a small habitation in the vicinity of present-day Ocracoke, then called "Wococon."

A scholar of Algonquian linguistics has suggested that the word "Croatoan" means "council town" or "talk town," which likely indicates the residence of an important leader and a place where councils were held. Archaeological remains of at least two other Croatoan villages have been located elsewhere on Hatteras Island. The Croatoan are best remembered today because the word " CROATOAN," carved in a post, was found by John White in 1590 in his search for the famous Lost Colony.

The Croatoan's principal town, Croatoan, was possibly located at a site on Cape Creek that has been identified and partially excavated by archaeologists. Undoubtedly, some modern-day residents of coastal North Carolina can claim with considerable justification to be the descendants of the Croatoan/Hatteras and other Algonquians of over two and three centuries ago, but no recognizable tribal entities survive. The remains of a sizable Indian village on Cape Creek and Pamlico Sound near Cape Hatteras have been discovered and to some extent explored by archaeologists under David Phelps of East Carolina University. In addition to artifacts of Indian manufacture, European trade goods have been recovered, giving added credibility to the recorded history of the Croatoan.

F. Roy Johnson, The Algonquians: Indians of That Part of the New World First Visited by the English (2 vols., 1972).

Theodore de Bry Map, 1590. Courtesy of the University of Pennsylvania Libraries. Available from http://www.library.upenn.edu/exhibits/rbm/kislak/promotion/debry4.html (accessed May 22, 2012).