The Death of Zelda Fitzgerald 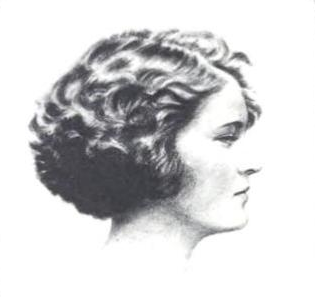 Late on the night of March 10, 1948, a fire started in a kitchen of the main building of Highland Hospital in Asheville, North Carolina. Spreading rapidly through a dumbwaiter shaft, flames reached every floor, and, in spite of efforts by hospital staff and local fire fighters to evacuate everyone from the building, nine patients died. Among the victims of the fire, identified only by her slipper, was Zelda Fitzgerald, who with her husband, the writer F. Scott Fitzgerald, represented for many the talent, sophistication, glamour and excess of American life of the 1920s.

Zelda Sayre, the daughter of an Alabama state supreme court justice, met Francis Scott Key Fitzgerald in 1918. She was a Montgomery, Alabama, belle, pretty, vivacious, and independent, and he was a former Princeton student from the midwest with a burning ambition to make his name as an author. Their marriage in 1920 was followed almost immediately by Scott’s emergence as one of the most popular writers in America. With the substantial income from Fitzgerald’s short stories and novels Scott and Zelda lived a life of excitement and sophistication in Europe and America.

Beneath the surface of their marriage, however, Scott and Zelda were an increasingly unhappy couple. Their personalities clashed in an environment made stressful by their extravagant lifestyle. In 1930 Zelda suffered a breakdown and was diagnosed (perhaps incorrectly) with schizophrenia. From then until 1940 her life was spent mainly in mental institutions in Europe and America, except for short periods living with her family. At the same time Scott’s popularity waned and his income fell. Looking for a less expensive place to relax and recover, he began visiting the area around Asheville, North Carolina. In 1936 he moved Zelda from an institution in Maryland to Highland Hospital in Asheville. 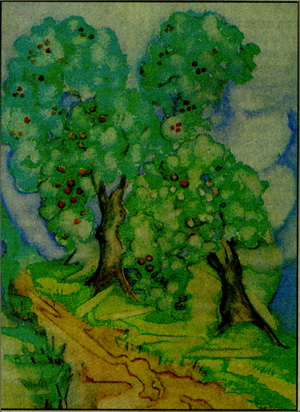 Zelda remained for four years at Highland under the care of Dr. Robert S. Carroll, who has been described as “something of an original in American psychiatry.” Carroll believed in treating mental illness in part with a regime of diet and exercise although he also used other standard therapies of the day. Zelda, who saw her husband, daughter, and other family infrequently, was often lonely at Highland, but she made progress there. She participated in activities such as hiking and playing tennis, and she continued to write and paint, pursuits she had begun in the 1920s. Zelda’s painting reproduced on this page was purchased from a collector for the North Carolina Collection Gallery in 1991. It is identified on the back as depicting a Highland Hospital scene.

In 1940 Carroll agreed to release Zelda to live with her widowed mother in Montgomery. Over the next decade Zelda returned several times to Highland for brief periods of treatment, including the visit which ended in her death in the fire of March 10.

By the time of the tragic fire, Highland Hospital had become part of the Duke University medical system. Duke sold the hospital to a private psychiatric business in the early 1980s. The hospital closed for good in 1993 and today the property includes an office park and shopping plaza.

I believe I live just behind

I believe I live just behind the old hospital she died in. I recently moved to Asheville NC and live off of Montford.

So thrilled to discover this

So thrilled to discover this valuable source for NCpedia history and or heritage sources.

I think they actually

Thank you for your comment. It appears that a slipper known to be hers was found at the scene. However, dental records were consulted and confirmed Fitzgerald's identity.