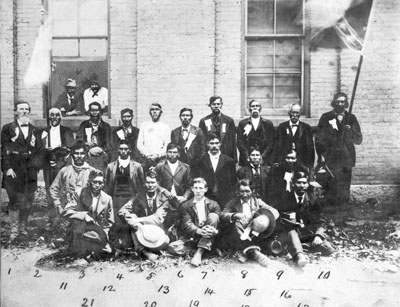 the battle of deep creek, also called the battle of quallatown, was a civil war engagement that occurred on 2 feb. 1864. union troops from the 14th illinois cavalry under maj. francis m. davidson attempted to destroy the forces of cherokee chief william holland thomas (called thomas's legion) by surprising the indians and highlanders at deep creek ten miles west of quallatown. after an hour of fighting, davidson reported that he killed nearly 200 confederates, although southern records reported the loss of only 2. the northerners claimed that the battle of deep creek was a great victory in which they had wiped out thomas's indian companies. they escorted their cherokee captives to knoxville, where they flattered the indians and promised them substantial rewards if they would abandon the confederacy. the cherokee prisoners were also told that they would receive their freedom and $5,000 in gold in return for thomas's scalp. when the cherokees agreed to that condition, the union forces released them. but on reaching their camp, the indians joked about their promises and promptly returned to confederate service.