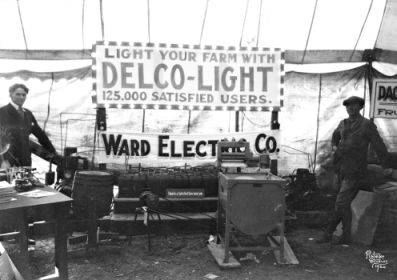 Delco lights, invented in 1912 by C. F. Kettering in Kokomo, Ind., were used by many North Carolinians before the federal government's efforts to electrify the rural South during the Great Depression. The Delco Light system consisted of a generator that ran on kerosene and was hooked to a series of batteries such as those found in a car. The system produced and stored 32 volts of current without the noise or nuisance of a constantly running generator. The Domestic Engineering Co. of Dayton, Ohio, began producing Delco Lights in 1916, and by autumn 1919 Delco products were advertised for sale in the state in Raleigh, Rocky Mount, and Oxford. These products, together with products from major competitors Kohler, Cooper-Hewitt, and Westinghouse, offered a reliable source of electric lighting and power. Luxuries enjoyed by city dwellers, such as late-night reading, sewing, or working by lamp light, became available to whomever could afford the Delco system.

The Delco system had drawbacks, however. The generator fuel was considered dangerous and poisonous if mishandled. To hold the electric charge, the batteries required a mixture of acid and water-a highly corrosive fluid containing lead that could contaminate the surrounding environment. Those who experienced the life-changing effects of Delco Lights regarded such risks as negligible, though, and the novelty of electric lighting in the countryside resonated in North Carolina. In the tiny Columbus County community of Pershing, a new high school was built with a Delco system installed. Patrons were so awed and proud of their school and its lights that in 1918 they changed the town's name to Delco.