By Kathelene McCarty Smith, 2018
Originally published as “Harriet Elliott: Teaching and Making History” in Spartan Stories, Tales from the University Archives at The University of North Carolina at Greensboro. Published with permission.

Harriet Wiseman Elliot was truly a woman ahead of her time. Her students would say that she not only taught history, but made it. 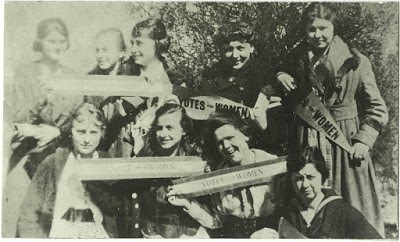 Harriet Elliot came to the State Normal and Industrial College (now UNCG) as a faculty member in the Department of History and Political Science. During her time at the college, she would inspire generations of students to learn about government, democracy, and their responsibilities as citizens of the United States.

Born to a very political family, Miss Elliot’s interest in current affairs began when she was growing up in the small town of Carbondale, Illinois. Concerned with social injustice and community economics, her father Allan Elliott, attended many political rallies and parades, and took his young daughter with him. Mr. Elliot was an avid Democrat, and as it was mostly Republican territory, the Democrats often lost local elections. Reacting to the frequent losses, Harriet exclaimed, “Why don’t you change your vote so we can be on the winning side sometimes?” This was a sign of things to comes – Harriet Elliot did not like to lose.
As Harriet’s parents believed in women’s education, she was sent to Hanover College in Indiana. It did not take long for her to establish herself as a rebel. She campaigned against rules that she thought were absurd, such as the living and working circumstances in the dormitories and poor condition of local prisons.

While earning her Master’s degree at Columbia University, Harriet became more passionately interested in suffrage. It was at a college lecture on women’s rights that she would meet Dr. Anna Howard She, a leader in the national suffrage movement. After Dr. Shaw’s talk, Harriet waited backstage to speak to her. They immediately discovered that they were political kindred spirits and became lifelong friends. It was Dr. Shaw who suggested that Harriet’s true calling was to study, and eventually teach, political science.

When “Miss Elliott” joined the faculty of the State Normal, she brought fresh and sometimes controversial ideas to the Southern women’s college. Her students looked forward to her fiery lectures on history and politics, which introduced concepts such as “women’s rights, informed electorate, the democratic way, responsible freedom, and the dead weight of uniformity.”She encouraged independence of political thought and even helped her students form the Student Government Association in 1915. 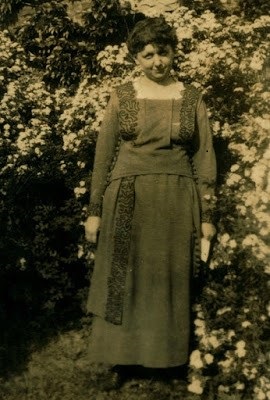 In April of 1917, the United States entered into the First World War. Miss Elliott realized that with the world changing so profoundly, so must her teaching methods. Instead of using textbooks for lessons in current events, she asked that her students prepare for class by reading the daily paper. She believed that this was the best way to show that “government (was) a living subject.” Miss Elliott took every opportunity to educate her young students about women’s equality in wartime nation, offering a program in June 1918, titled “Women and War.”

Moving beyond the confines of the campus, Miss Elliott also spoke to the community, calling for women to go to war — overseas or at home! Recognizing her passion for politics, President Woodrow Wilson appointed her to the North Carolina’s Women’s National Defense Council. She was also a prominent member of the state’s Woman’s Committee. But perhaps most of all, Miss Elliot was a suffragist, constantly advocating for the right for women to vote. She resented being grouped “among idiots and criminals (who) were classified as politically incompetent” to cast a ballot! She felt so strongly about her personal right to participate in elections, that she maintained her legal residence in Illinois so that she could vote there. Women had been able to vote for the president and in local elections in Illinois since 1913.

Miss Elliott was strongly connected with leaders to the suffrage movement. She worked with the Federation of Women’s clubs and spoke across the state about women’s rights. She was also a member of the North Carolina Equal Suffrage Association and scheduled many strong suffrage advocates to speak to the student body of the State Normal. These speakers included Jeannette Ranking, the first woman to serve in the United States Congress, as well as her friend, Dr. Anna Howard Shaw, who spoke at the school on three occasions between 1917 and 1919. Miss Elliott and her students were hopeful that North Carolina would soon ratify the 19th Amendment, but it was not to be. When the suffrage bill went in front of the North Carolina Legislature, it was not ratified. Fortunately, on April 20, 1920, the requisite number of states passed legislation officially granting American women the right to vote.

After women gained the vote, Miss Elliot expanded her efforts to inform the women of North Carolina of their rights. In June of 1920, she offered “A School of Citizenship for Women,” which was open not only to her students, but to “all the women of North Carolina.” The program included lectures and round table discussions regarding the government’s structure and purpose. Miss Elliott was also a founding member of the North Carolina League of Women Voters. In 1926, Miss Elliott helped revive the League in Greensboro, which had lapsed, and encouraged the participation of the “New Voters League,” a chapter at the North Carolina College for Women (now UNCG).

She continued her interest in women’s rights and politics, and when the United States entered the Second World War, she was recruited by Franklin Roosevelt to serve as Consumer Advisor on the National Defense Advisory Committee and as a member of the Women’s Division of the War Finance Committee. 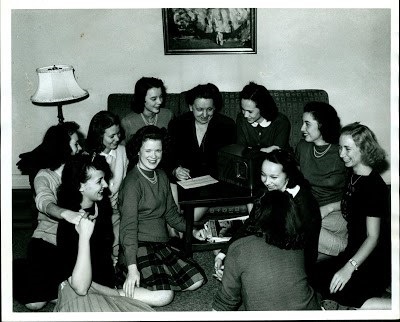 Following in Miss Elliott’s were thousands of alumnae — many becoming active in national, state, or local politics, the League of Women Voters, or other community organizations. Perhaps more than anything – that was her greatest legacy.

[Harriet Elliott in the midst of State Normal students, circa 1920]. Photograph. No Date. University of North Carolina at Greensboro Special Collections and University Archives. (used with permission)