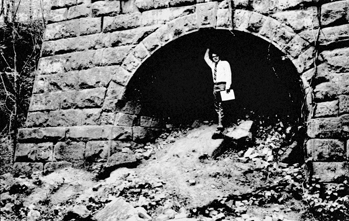 Endor Furnace, a large smelting furnace near Cumnock in Lee County, provided iron to the Confederacy from 1862 to 1865 and thereafter operated periodically through the end of the nineteenth century. Two months after chartering the company in 1862, the investors purchased the Deep River plantation of Alexander McIver and constructed the furnace on the site. The furnace probably supplied the Confederate arsenal at Fayetteville in addition to small nearby arms factories. In 1864 the Wilmington businessmen who composed the company sold their interests to local buyers. These individuals emerged from the war heavily in debt, and in 1870 their holdings were sold at auction. George Lobdell of Delaware, a manufacturer of railroad car wheels, bought Endor Furnace, paying $1,000. With his partner J. M. Heck of Raleigh, Lobdell formed the Cape Fear Iron and Steel Company and invested more than $500,000. By 1872 there was in place at the site one of the South's largest and best-equipped iron furnaces along with a rolling mill and foundry.

Two years later the operators discovered that the local mineral deposits were smaller than had been estimated. In addition, the system of dams and locks necessary to reach the port at Wilmington were never satisfactorily completed. By 1876 the operation had ceased and most of the machinery was dismantled and removed. The furnace continued to operate until 1896 on a much smaller scale but served only local manufacturers. Its structure, built of reddish-gray rough-cut stones and standing 35 feet tall, was still standing at the end of the twentieth century.