by David Stick and Kathy Carter, 2006

Fishing for both finfish and shellfish has long been an important source of income throughout the coastal area of North Carolina. The state's relative isolation from major markets, the absence of efficient transportation systems, and the perishable nature of the product combined to limit the profitability of fishing until the late nineteenth century. In 1890 shad, herring, oysters, mullet, and bluefish accounted for more than 99 percent of the products of the state's fisheries. By 1940, however, nearly half of the commercial catch was in shrimp and hard-shell crabs, and the once-important shad and herring fisheries were on the verge of extinction. 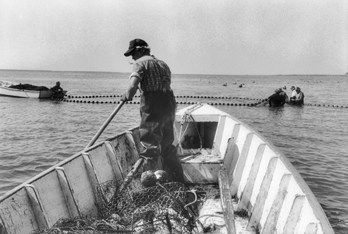 Fishing techniques have varied with species and with advancing technology. The pound net, employed beginning in the nineteenth century in sound fishing, allowed fish to swim into an enclosed area but prevented them from exiting. More or less permanently set in sound waters, pound nets and their markers were familiar sights. Also common were seine nets, thrown out and drawn around a school of fish by a work crew. For larger species such as sturgeon and red drum heavy tackle has been employed. A disappearing method, which was still used at the end of the twentieth century on the Outer Banks, is "haul net seining" from ocean beaches. In the nineteenth century, this method involved setting a net between two boats just beyond the surf, beaching the boats, and pulling the net to shore by hand. By the mid-1900s, four-wheel drive vehicles provided the pulling power. The technique was favored during seasons when large schools of migrating fish, such as bluefish or sea trout, were likely to swim close to shore.

Although the technology of transporting fresh fish advanced considerably in the late nineteenth century, the preferred method for most food species-such as mullet, mackerel, and shad-was to salt the fish before shipping to extend the life of the product. For sturgeon as well as shad in some seasons, the fishery yielded not the flesh of the species but rather its roe (eggs). An adult female sturgeon in Pamlico Sound, for example, might weigh a half-ton and yield 100 pounds or more of roe, which was salted and sold as caviar. Shad roe was considered a delicacy both locally and in northern urban markets. The emphasis on fish roe as a product for these two fisheries helped lead to declines in numbers and the quick disappearance of mature sturgeon from Pamlico Sound waters. 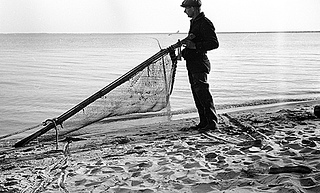 As the twentieth century progressed, the shrimp fishery declined, but the greatly increased culinary interest in crabmeat-combined with the continuing availability of large quantities of hard-shell crabs in the sounds and an astounding increase in the number of crabbers and crab pots-resulted by 1999 in blue crabs accounting for more than one-third of the total statewide catch of edible finfish and shellfish. Meanwhile, the catch of croaker, bluefish, flounder, king mackerel, spot, and weakfish maintained respectable levels.

Aquaculture, or fish farming, also grew in economic importance in North Carolina during the 1980s and 1990s. The National Fisheries Institute reported that farmed fish production increased at a nationwide average rate of 10.7 percent a year since 1984, as compared to only 2.6 percent for total livestock meat production. By the early 2000s there were approximately 250 individuals in North Carolina licensed for pond and tank aquaculture, with total food-fish aquaculture sales totaling more than $19 million. Trout was the most profitable species, followed by hybrid striped bass, catfish, and softshell crab. 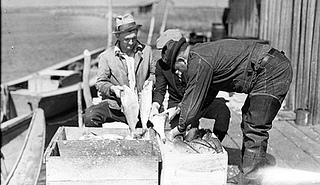 The menhaden fishery developed in the state not to supply food to market but to extract oil and other uses from the menhaden, sometimes known locally as the "fat-back." The processing of menhaden oil and meal has been an important part of the economy of many coastal communities, especially in the Beaufort area. The menhaden fishery was probably the biggest, most profitable fishery in North Carolina from the late nineteenth to the mid-twentieth century. Atlantic menhaden has continued to be plentiful and heavily harvested, although the species is less profitable than such resources as crabs and shrimp. In 1998 fishing crews harvested more than 57 million pounds of menhaden, with a dockside value of $4 million. Culturally, the fishery made a unique contribution to coastal tradition: the work chanteys and lifestyles of early menhaden fishing crews have remained an important and colorful part of the coastal heritage.

Barbara Garrity-Blake, The Fish Factory: Work and Meaning for Black and White Fishermen of the American Menhaden Industry (1994).