"Goodliest Soile under the Cope of Heaven" 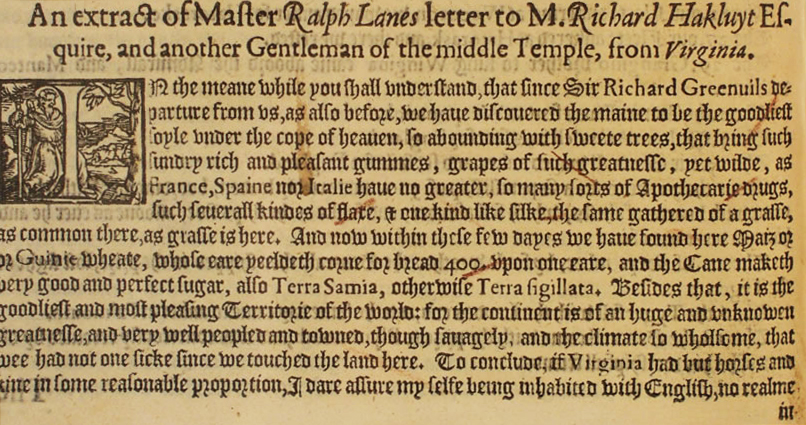 "Goodliest Soile under the Cope of Heaven" is the phrase used by Ralph Lane, leader of one of Sir Walter Raleigh's Roanoke voyages, to describe the coastal region of North Carolina. Lane penned the description in a letter to Richard Hakluyt the elder on 3 Sept. 1585. The oft-quoted phrase, which is sometimes rendered incorrectly as the "Goodliest lande under the cope of heaven," is revered by North Carolinians as a romantic and fitting expression of the natural beauty of the state.

Lane, Ralph. "An Extract of Master Ralph Lane's Letter to M. Richard Hakluyt, Esquire, and Another Gentleman of the Middle Temple, from Virginia." Explorations, Descriptions, and Attempted Settlements of Carolina, 1584-1590. Raleigh, N.C.: State Department of Archives and History. 1948. p.33 https://archive.org/stream/explorationsdesc00corb#page/32/mode/2up

"The Settlement at Roanoke: What problems did the settlers face? Source 1." Durham University Museums and Special Collections. http://www.dur.ac.uk/4schools/Roanoke/CS1s1large.htm

Part of a letter to Richard Hakluyt by Ralph Lane, dated September 3, 1585. Image from The Third and Last Volume of the Voyages, Navigations, Traffiques and Discoveries of the English Nation, London. 1600. p.254-255. From "The Settlement at Roanoke: What problems did the settlers face? Source 1." Durham University Museums and Special Collections. https://community.dur.ac.uk/4schools.resources/Roanoke/default.htm