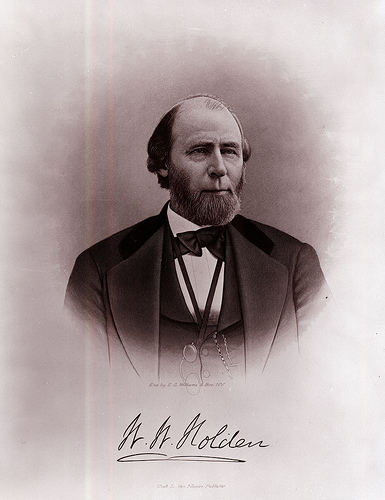 On 29 May 1865 President Andrew Johnson unveiled two proclamations designed to bring North Carolina back into the Union after the Civil War. (Similar announcements affecting most of the other southern states soon followed.) The Proclamation of Amnesty and Pardon granted pardons and the "restoration of all rights of property, except as to slaves" to all citizens who took an oath of allegiance to support the United States, its laws, and its decrees, including Abraham Lincoln's Emancipation Proclamation. The proclamation did not cover 14 classes of former Confederates, who had to apply for special pardons. These classes included those above the rank of colonel in the Confederate army, those who had held office in the Confederate government, those who had left federal judicial posts to aid the Confederate cause, and those who had participated in the rebellion and owned over $20,000 of taxable property.

Johnson's second proclamation appointed William W. Holden provisional governor of North Carolina and outlined the procedure by which the state could establish its loyalty, reorganize its government, and eventually return to the Union. Holden was to convene a state convention, composed of those "loyal to the United States, and no others, for the purpose of altering and amending the Constitution." Only citizens who had taken the loyalty oath or had received a special pardon could vote for or serve as delegates. If necessary, the military would assist Holden in implementing this decree. Privately and publicly, Johnson made it clear that the delegates to this convention were to eliminate slavery in North Carolina, as well as acknowledge that secession had been illegal and that the states were subordinate to the central government. Finally, they were expected to repudiate any debt contracted to aid the rebellion.

Holden waited until 9 August to issue a third proclamation on matters related to timing: the election of delegates would be held on 21 September and the convention would begin on 2 October. At the meeting, delegates focused on determining the absolute minimum requirements the president considered necessary for reunion and then debated the exact ways they would implement them. The ordinance that prohibited slavery in North Carolina engendered little argument. Although a few opposed the inclusion of "forever" in the document, it passed unanimously on 7 October. The proposal to declare the 1861 secession ordinance "null and void" faced more opposition. After a three-day dispute over whether to simply repeal the edict or declare it null and void, the delegates finally passed the original proposal by a vote of 105 to 9.

The longest debate centered around the ordinance "prohibiting the payment of all debts created or incurred in aid of the late rebellion." Many argued that such a repudiation would ruin the state financially and that it was unnecessary for restoration. Not until President Johnson, in response to a Holden telegram, wired the convention that "every dollar of the debt created to aid the rebellion . . . should be repudiated finally and forever," did the delegates, on 19 October, the last day of the convention, enact the ordinance.

The convention achieved little else. It appointed a committee to receive an address from the state's Freedmen's Convention, which recommended the creation of a commission to prepare a code of laws for former slaves. The constitutional convention also resolved to seek the removal of all black troops from the state. Through its debates and resolutions, then, the 1865 convention set the stage for North Carolina's struggle over the transition from slavery to freedom.