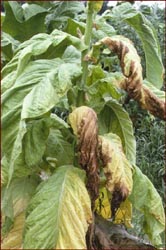 Granville wilt is a bacterial disease that affects the tobacco plant. It was discovered in 1881 in Granville County. By 1910 it would cost tobacco farmers in North Carolina between 25 percent and 100 percent of their crops annually. The U.S. Department of Agriculture tobacco specialists feared that the entire U.S. tobacco crop would be wiped out as a result of Granville wilt. The disease forced many North Carolina farmers to sell their farms and homes in the early twentieth century. Many producers went bankrupt, gave up planting tobacco, and moved away or chose other crops.

Granville wilt thrives under moist and hot conditions. It works its way into the plant through surface wounds then multiplies rapidly into the vascular system, producing a slimy mucous that plugs up the plant's vessels and causes the tobacco to wilt. The bacteria that cause the disease are carried throughout tobacco production on transplants, plow points and other farm equipment, and the feet of humans and animals. In the modern day, successful control of Granville wilt depends on carefully selected methods that include wilt-resistant tobacco varieties, crop rotation, root destruction, and soil treatment.