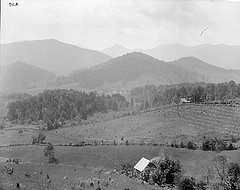 Headrights, or landrights, was a term applied in the colonial period to the system of granting unclaimed land to persons who imported new settlers to the Carolina colony. In 1663 the Crown divided territory that included North Carolina among eight Lords Proprietors to dispose of as they chose. As early as 1681 the Proprietors made grants, varying in size, to individuals who brought in settlers. The size of the grant depended on the number of settlers, even though all the land belonged to the importer. The grant usually, but not always, comprised 50 acres per individual, counting the importer himself as well as each individual such as a spouse, child, relative, servant, or slave. William Symons, for example, "proved 5 rights": for himself, Robert Smith, Emanuel Altooy, "Maria a negro transport," and Hannah Symons.

The headrights system required that a certain portion of the issued land be cultivated, and an annual fee (based on acreage and called a quitrent) was levied. After the American Revolution, however, the system of headrights was no longer used.