Settlers of the Albemarle

Escape through the Great Dismal Swamp 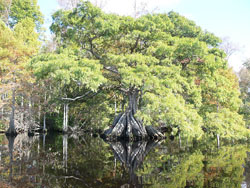 The English colony of Virginia, settled since 1607, was not a place of possibility for the poor by 1650. Servants suffered horrible treatment. When they completed their terms of indenture, they discovered that all the good land lay in the hands of a few rich men. But an area to the south, not yet settled by Europeans, beckoned. Unfortunately, a huge swamp blocked the way. To make a home in Carolina, those servants would have to discover a path through the wilderness.

Two Virginia gentlemen, sent to determine the boundary between Virginia and North Carolina, slogged around the area in 1711. Even then, sixty years after the first Carolina settlers, no clear routes marked the way. "We Crosst several miring branches in which we were all terribly bedaubed," they wrote. Three days later, the men "were well soused in a myery meadow by the way of which we crossed severall." They resorted to traveling by canoe, getting out two miles from their destination and forced to take a long detour, "there being no firm land nearer." Later, they "mist our way being wrong directed, and rid eleven mile almost to a myery swamp, almost impassible." The wanderers, one now suffering from a fever, then led their horses "three mile through a terrible myery Pocoson." Not used to such hardships, the gentlemen surrendered at one stage, "there being no passage through the Dismall."

Despite the difficulty, for those who wished to escape their lives in Virginia, the Dismal Swamp became more of a beacon than a barrier.

Once the Lords Proprietors received their Carolina Charter in 1663 and began offering free land grants to attract settlers, another group joined the servants. Quakers had come under attack in the early 1660s. The Virginia Assembly passed an Act for Suppressing the Quakers, and Virginia governor William Berkeley scolded one sheriff, "I hear with sorrow that you are very remiss in your office, in not stopping the frequent meetings of this most pestilent sect of the quakers." So these persecuted people also headed south through the swamp. Routes must have been spread by word of mouth. No one left any visible signs, for people did not want to be followed and found by their former planter employers or sheriffs. The first English explorer to become a settler in North Carolina, then known as Albemarle, was a trader named Nathaniel Batts. He bought his land from the American Indians in 1660. Having traded with the Indians since the 1650s, Batts set an example of fair dealing and friendship. The next wave of settlers followed his lead. Quaker leader George Fox, on a missionary trip in the 1670s, found a society where many Indians and Europeans lived close to one another and willingly attended his services together. There seemed to be no communication troubles. Peace reigned for the next forty years. Batts guaranteed limits to English settlement under a 1672 treaty: The regions west of the Chowan River and south of Albemarle Sound would remain Indian country. The first generation of settlers in this area respected the land boundaries, so they never had to deal with Native hostility like the people of many other regions and colonies.

In small boats, these early travelers wended their way down the creeks and streams to the peninsulas poking into Albemarle Sound. Their explorations beyond the swamp revealed a hospitable wilderness. Rich soils promised a good harvest. Forests of oak, cedar, and pine sheltered deer, turkey, and bear. The rivers overwhelmed the European newcomers with their quantities of bass, trout, bluefish, and sturgeon. The fish, in turn, attracted a lot of wildfowl, or birds.

The Carolina coast was a land of hurricanes, so settlers built impermanent homes. It made little sense to devote resources to housing, with violent storms expected every few years. The people stuck wooden posts deep into the ground without any foundation, covered that frame with wattle and daub—branches and vines packed with clay—and thatched the roof. Surrounding the house, the typical 200-acre, mostly wooded farm usually had about twenty acres cleared for crops—corn and wheat, plus tobacco—and a garden for beans and peas. The newcomers scattered some distance from each other, avoiding the diseases that had killed many in Virginia. They kept large dogs to protect livestock against wolves. Northeastern Carolina offered a lonely lifestyle, but occasionally farmers rowed across the rivers to help other families with harvests and to enjoy merrymaking.

Life in the Albemarle wilderness freed women of the fancy manners and behavior expected of them in cities. "The water being shallow we could not get the boat to the shore, and the secretary's wife came in a canoe, barefooted and barelegged, to get us to land," Fox wrote in 1672. A later visitor wrote of another female resident, indicating her reputation locally was that of "a very civil woman," who "shews nothing of ruggedness or Immodesty." But he then described how "she will carry a gunn in the woods and kill deer, turkeys . . . shoot doun wild cattle, catch and tye hoggs, knock down beeves [slaughter cattle] with an ax"! The fine lady could "perform the most manfull Exercises as well as most men in those parts."

An Anglican missionary in Albemarle painted a picture of a community of skilled ex-servants, the men able to be their own "carpenters Joiners Wheelwrights Coopers Butchers Tanners Shoemakers Tallow Chandlers waterman & what not." The women were "Soap makers Starch makers Dyes &c . . . over and above all the common occupations of both sexes." He continued, "All seem to live by their own hands of their own produce." Although tobacco might be the only source of cash, farming provided basic food, and plenty of fish and game surrounded the settlers, too. Livestock required little care, making for an "easy Way of living in that plentiful Country." The most eastern area, including the Outer Banks, sheltered some of the poorest people. One visitor described his lodgings as "a wretched open old house . . . it kept the Dew from us but had it rained we should have been well souzed." Nonetheless, even there the settlers feasted on "verry large good fatt oysters and much fish."

So we see that these explorers and first settlers in North Carolina had found a wonderful spot where they did not have to work for other people: a real land of opportunity. They could build new lives on their own terms.

References and other resources: