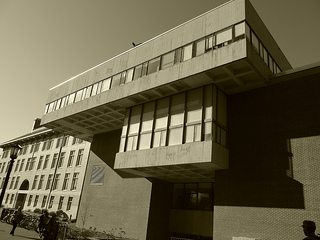 With individual newspapers serving its many small and medium-sized cities, North Carolina saw the rise of a high-quality and competitive press that, in turn, developed a large community of talented journalists. In 1981 the North Carolina Journalism Hall of Fame was established to honor these journalists. The Hall of Fame is sponsored by the School of Journalism and Mass Communication at the University of North Carolina at Chapel Hill, although honorees need not have a tie to the school. Individuals selected, however, are distinctively identified with North Carolina or have strong ties to the state. Inductions take place during the school's spring "Journalism Days" celebrations. The Hall of Fame's first five inductees were Josephus Daniels of the Raleigh News and Observer, Charles Kuralt of CBS News, C. A. "Pete" McKnight of the Charlotte Observer, Vermont Royster of the Wall Street Journal, and Tom Wicker of the New York Times. As of 2004, more than 100 journalists had been inducted, including such luminaries as Harry Golden, Roger Mudd, Jeff MacNelly, Lou Harris, Marjorie Hunter, David Brinkley, and Jonathan Yardley.

Please note that the link to

Thank you! It has been

Thank you! It has been corrected.