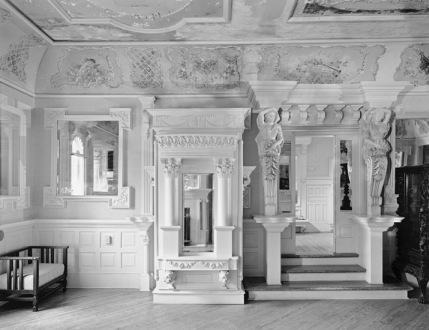 Körner's Folly is the name applied to a house completed in 1880 by Jule Körner (1851-1924) in Kernersville. Noted for its odd exterior appearance as well as for its eccentric and highly decorated interior, the house features high gabled roofs and tall, narrow, irregularly spaced windows. Its many unusual architectural elements reflect the extraordinary imagination of its creator.

Körner was a photographer, sign painter, and portrait painter. Under the pseudonym Reuben Rink, he achieved success designing signs and other advertisements for the Blackwell Tobacco Company, makers of the wildly popular Bull Durham brand of smoking tobacco.

After Körner's death, the house was used for many enterprises, including a funeral home, an antique shop, and an architect's office. Körner's Folly Foundation, a nonprofit organization made up of family members, eventually took over the house. Dedicated to preserving the highly unusual house and opening it for public view, the foundation continues to raise money for the preservation and restoration of the house.

Körner's Folly, Video produced by UNC-TV and Our State Magazine, with support from BB&T. Segment originally aired on 10/5/2005: http://www.youtube.com/watch?v=OrtPrGBaQ3M

My father shared that his

My father shared that his grandmother laid in wake? at Korner's Folly, when it was a funeral home. Are there any records available that could verify this? Her name was Lettie Everett Stigall. She died Dec 7, 1947. Any help would be most appreciated. Thank you.