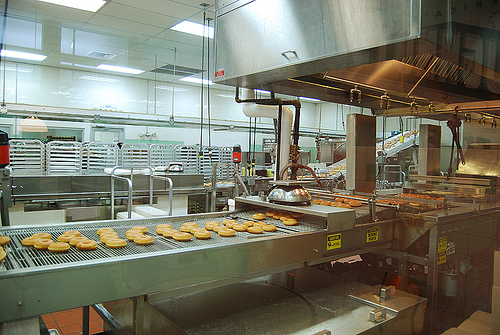 Krispy Kreme Doughnut Corporation was founded in Winston-Salem in 1937 by Vernon Rudolph. A few years earlier Rudolph’s uncle, a Paducah, Ky., storeowner, had purchased a secret yeast-raised doughnut recipe and the copyrighted name Krispy Kreme from New Orleans chef Joe LeBeau. The uncle hired Rudolph to sell doughnuts door-to-door, but soon Rudolph was looking for a way to sell on a larger scale. He and various family members subsequently opened shops in Nashville, Tenn., Charleston,W.Va., and Atlanta, Ga.

Rudolph eventually settled in Winston-Salem, where he and two partners began making Krispy Kreme doughnuts and selling them out of a 1936 Pontiac with a delivery rack in the back seat. As demand for his fresh doughnuts grew, Rudolph converted his doughnut-making facility in the Old Salem area into a retail store by cutting a hole in the wall and installing a sales window. In the 1940s and 1950s, the company standardized its product with central manufacturing of the Krispy Kreme mix, distributed to a growing network of doughnut and coffee shops, and invented and manufactured its own doughnut-making machinery. By the 1960s Krispy Kreme stores were visible throughout the Southeast with recognizable green-tiled roofs and glowing signs touting ‘‘Hot Doughnuts Now.’’ After Rudolph died in 1973, the company was reorganized for a 1976 sale to Beatrice Foods. A group of associates, early franchisees, bought the firm in 1982.

Krispy Kreme opened its first store in New York City in 1996 and its first in California in 1999. In April 2000 Krispy Kreme became a publicly traded company, and in December 2001 it opened a store in Toronto, Canada, one of 49 added that year. Despite store closings in Canada and controversy related to the company’s bookkeeping methods, by 2006 Krispy Kreme was selling a total of 2.7 billion doughnuts annually at nearly 400 locations.

In 1997 Krispy Kreme gained icon status when company artifacts were donated to the Smithsonian Institution’s National Museum of American History.

William Lewis Rudolph (known as Lewis), brother of Vernon Rudolph and Krispy Kreme co-founder, died on December 31, 2014 in Nashville, Tennessee at the age of 95.  Following incorporation of the company in 1947, Lewis Rudolph had served as vice president.