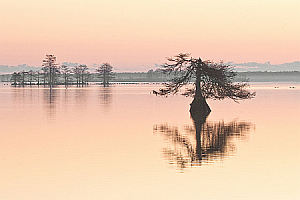 Lake Mattamuskeet—so named by Algonquian Indians—is North Carolina’s largest natural lake. The ancient body of water has not escaped man’s intervention. Originally, Mattamuskeet was a shallow, self-contained lake without creeks or rivers feeding it. The lake’s waters were solely the product of rain, runoff, and ground water. Europeans first viewed what became known as Lake Mattamuskeet in1585, during one of Sir Walter Raleigh’s first expeditions  to the New World. The native cultures living in the lake region were disrupted by European settlement during the colonial period. Following the Tuscarora War, a reservation was established at the lake in 1715 for the Core, Cotechny, and Mattamuskeet Indians. White encroachment continued, however.


In the nineteenth century, the first attempts were made to drain the lake in order to claim its fertile bottom as farmland. In 1837, with the lake under ownership of the State Literary Board, a seven-mile canal was completed (using the labor of enslaved people) from the lake’s south shore to Wysocking Bay on the Pamlico Sound. Partially drained, the lake was reduced to 55,000 acres, or less than half its original size. Farming flourished in the rich soil surrounding the lake, even without fertilizer. In 1909, the legislature authorized the creation of the Mattamuskeet Drainage District. More canals were dug, and a pumping system was devised to drain the lake. In 1915, the village of New Holland was laid out near the pumping station. Between 1916 and 1926, Lake Mattamuskeet was drained and reclaimed three times. On the third try, the drainage system kept the lake and surrounding farmlands relatively dry for more than five years. But the drainage efforts (through a series of owners) were costly and fraught with natural difficulties. Nature prevailed, thus ending an era in the region when man tried to harness forces beyond his control. 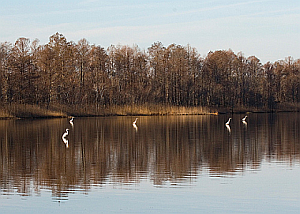 In 1934, the lake was acquired by the U.S. Government, and the Mattamuskeet National Wildlife Refuge was established. Mattamuskeet Lodge (the old pumping plant) welcomed its first hotel and restaurant guests in 1937. The lodge operated until 1974. The building, in a state of deterioration, was closed to the public in November 2000. Today, scenic Lake Mattamuskeet (at 40,000 acres) remains a major stopover for thousands of migratory birds traveling the Atlantic coast. The lake area also enjoys a lively tourist trade, with about 50,000 visitors annually.