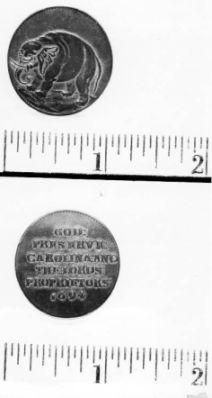 Mercantilism dominated economic thought in the West between roughly 1500 and 1800. In the mercantilist system, a colony such as North Carolina was intended to contribute to the economic and political strength of the metropolitan power that undertook or authorized its establishment. A colony supplied the mother country-in North Carolina's case, Great Britain-with important raw materials, commodities, or products. It also served as a market or "vent" for commodities, goods, and services supplied by the mother country. North Carolina's imports were largely processed, finished, or semifinished goods. Moreover, almost all of North Carolina's trade was conducted according to British mercantile guidelines regarding venues, carriers, and personnel.

Some of North Carolina's exports, however, received monetary encouragement in the form of bounties or subsidies from the mother country, without which they would have been much less competitive. When one factors in the relatively high living standards in colonial North Carolina, the superior quality and low price of most imported goods, and the relatively inexpensive military protection provided by Britain, it seems clear that on balance the mercantilist relationship was not particularly burdensome to North Carolina's economic development.