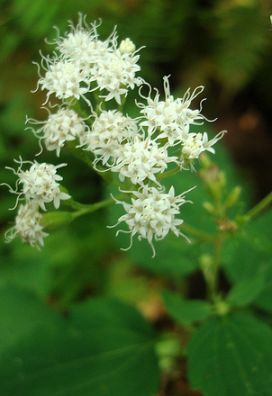 Milk sickness, also called "milk sick fever" and "sick stomach," is caused by the excretion of tremetol or tremetone, the toxin in white snakeroot and rayless goldenrod, when these common plants are consumed by herbivorous animals. The human poisonings resulting from the consumption of contaminated meat and milk products were a serious problem in North Carolina from colonial days through the nineteenth century. Milk sickness seldom troubled populated areas but frequently devastated frontier communities of Appalachia and other regions where medical information was scarce. For that reason milk sickness was not widely understood until the early twentieth century and was frequently confused with other diseases and attributed to contaminated water, various insects, metals, and a variety of plants. Physician Thomas Barbee first published an account of the malady in 1809, and fellow doctor Daniel Drake began to study it the following year. It was Drake who observed in 1835 that the disease had been known in North Carolina for more than 60 years.

Milk sickness appeared annually from July until the onset of winter. In especially hot, dry summers, some communities lost one-quarter to one-half of their inhabitants. Settlers soon learned to recognize signs of the ailment in their cattle, a general weakness known as the "trembles," especially noticeable after the animals had run for a few minutes. Similar symptoms of weakness, accompanied by nausea, vomiting, and constipation afflicted humans. Death occurred in two to ten days. The victim might recover only to relapse and die after exertion or survive but remain weakened for months or years.

By the 1820s researchers had identified a connection between cattle that were allowed to run freely in the woods and the increased frequency of milk sickness and noted that cultivated pastures virtually eliminated it. In 1828 an Illinois woman, Anna Pierce, correctly identified the cause of the sickness with the advice of a Shawnee woman, but her discovery remained little known. In 1840 Drake argued to a wider audience that herbivorous animals got milk sickness by eating an unidentified plant and then transmitted it to humans through the consumption of meat, milk, and butter. Unfortunately, he incorrectly identified poison oak and poison ivy as the culprits. It was not until 1906 that white snakeroot and rayless goldenrod were proved to be the sources of the toxin. Gradually, improved knowledge of the causes led to an abatement of the illness.