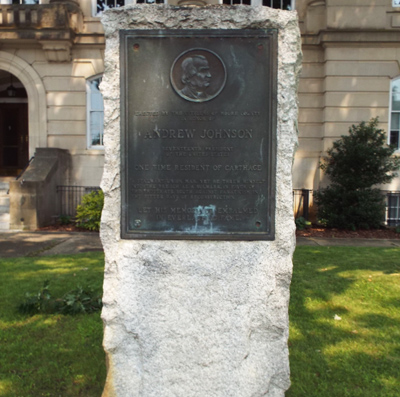 Andrew Johnson Monument
Carthage
View complete article and references at Commemorative Landscapes of North Carolina at: https://docsouth.unc.edu/commland/monument/310
Description: The monument consists of a large rectangular slab of granite standing about ten feet tall, with a large bronze plaque. Centered at the top of the plaque is a bas-relief portrait of Andrew Johnson facing to the right. Engraved under the portrait are words from the people of Carthage celebrating Johnson for his actions during Reconstruction.
Inscription:
ERECTED BY THE CITIZENS OF MOORE COUNTY IN HONOR OF / ANDREW JOHNSON / SEVENTEENTH PRESIDENT / OF THE UNITED STATES / ONE TIME RESIDENT OF CARTHAGE / A STALWART UNION MAN, YET HE THREW HIMSELF / INTO THE BREACH AS A BULWARK, IN FAVOR OF / THE PROSTRATE SOUTH AGAINST FANATICISM IN THE BITTER DAYS OF RECONSTRUCTION. / LET HIS MEMORY BE EMBALMED / IN EVERLASTING FAME.
Dedication date: Sometime after 1922
Materials & Techniques: Mount Airy granite, bronze
Sponsor: The citizens of Carthage
Unveiling & Dedication: The date and activities of the dedication are not known. The monument appears in photographs of the historic Moore County courthouse built in 1922. However, it does not appear in photographs of the prior courthouse which burned. The monument appears to have been erected sometime after 1922.
Subject notes: Andrew Johnson, who once resided in Carthage, was the 17th President of the United States. He succeeded President Lincoln after his assassination. Although a Unionist during the Civil War, he adopted policies during Reconstruction that were applauded by many white southerners. He did not promote the rights of the recently freed enslaved people and granted lenient terms to many former Confederates. Eventually, Johnson was impeached by the U.S. House of Representatives but was acquitted by the Senate.
Location: The monument sits in front of the east entrance to the historic courthouse in Courthouse Square in Carthage. Courthouse Square is located along NC Route 24/27.
Landscape: The monument sits on the lawn between the traffic circle and the courthouse.
City: Carthage
County: Moore
Subjects: Historic Political Figures
Latitude:
35.34566
Longitude:
-79.41681
Subjects:
Monuments
Places
Authors:
Commemorative Landscapes of North Carolina
Origin - location:
Moore County
Carthage
From:
Commemorative Landscapes of NC, University of North Carolina Chapel Hill.