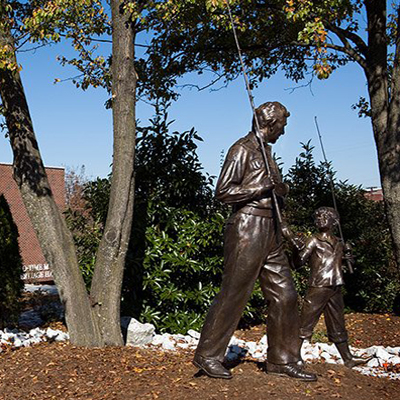 Description: A bronze statue depicting widower Sheriff Andy Taylor (Andy Griffith) and his young son, Opie (Ron Howard). The statue depicts the scene where father and son are walking a dirt road with their fishing poles during the opening sequence and theme song of the show.

Unveiling & Dedication: Friday September 24th, 2004 was the 15th annual Mayberry Days celebration in Mt. Airy. Mt. Airy native Andy Griffith, who was 78 years old at the time, was present at the unveiling ceremony.

Location: The monument is located on 218 Rockford St. in Mount Airy, North Carolina.

Former Locations: The first statue of Andy Griffith was placed in Raleigh; TV Land later commissioned another one for Mount Airy.

Landscape: The statue is located in the front of the Andy Griffith Playhouse.