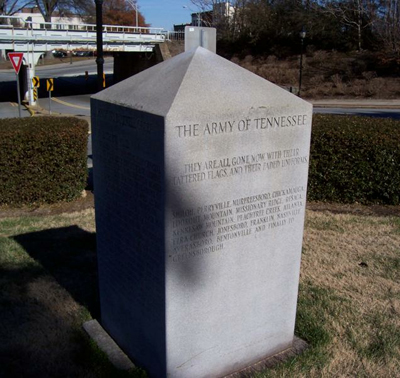 Description: A squat obelisk of smooth stone stands in the middle of Hamburger Square.


Left: On April 26, 1865, General Joseph E. Johnston surrendered the Army of Tennessee at Durham Station, North Carolina. The Army centered in and around Guilford County, surrendered its arms and flags and began to disband. Beginning May 1, 1865, paroles were issued for several days from Greensborough and distributed to the Army of Tennessee. On May 2, 1865, General Joseph E. Johnston issued General Order No. 22, bidding farewell to those he would later call his "Matchless Soldiers".


Right : Johnston's Farewell Order / General Orders No. 22 / Comrades: In terminating our official relations, I earnestly exhort you to observe faithfully the terms of pacification agreed upon: and to discharge the obligations of good and peaceful citizens, as well as you have performed the duties of thorough soldiers in the field. By such a course, you will best secure the comfort of your families and kindred, and restore tranquility to our country. You will return to your homes with the admiration of our people, won by the courage and noble devotion you have displayed in this long war. I shall always remember with pride the loyal support and generous confidence you have given me. I now part with you with deep regret - and bid you farewell with feelings of cordial friendship, and with earnest wishes that you may have hereafter all the prosperity and happiness to be found in the world.


Rear: Near this spot on April 13, 1865, President Jefferson Davis, members of the Confederate cabinet, and Generals Joseph E. Johnston and P. G. T. Beauregard met to discuss the Confederate military situation as a result of General Robert E. Lee's surrender at Appomattox. With the reluctant consent of President Davis, a letter was sent to General William T. Sherman requesting a cease-fire to allow civil authorities to negotiate a peace. As a result of this initiative, on April 26, 1865, Johnston surrendered the Army of Tennessee, which led to the end of the war. / Erected May 10, 1985 / by / The Col. John Sloan Camp 1290 / Sons of Confederate Veterans / C. Michael Briggs, Commander

Unveiling & Dedication: The monument was dedicated on Confederate Memorial Day in 1985.

Subject notes: It was in Greensboro that the Army of Tennessee disbanded in 1865 after General Joe Johnston Surrendered.

Landscape: The monument stands next to a magnolia tree in Hamburger Square. Nearby is a monument put up a year later to all Confederate soldiers from Guilford County, many of which served in the Army of Northern Virginia rather than the Army of Tennessee.