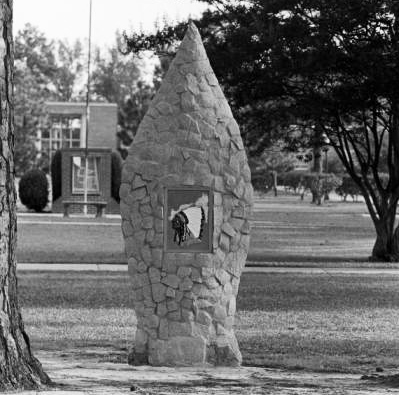 Description: This marker is in the shape of an arrowhead and stands approximately seven feet tall. The surface is a patchwork of irregular stones, and both the front and rear faces are inset with a metal plaque. The front plaque shows the bas-relief image of a Native American chief wearing a feather head dress, and the rear shows a small tablet with the image of a bison. The marker was moved twice in its history at the university, and was reconstructed most likely after the first move. A comparison of photographs throughout the history of the marker indicates that the stones on the monument are likely not the original stones used during construction in the 1930s. The metal plaques on both sides were painted at some point after the final move.

Dedication date: The marker was dedicated sometime around 1933.

Subject notes: This marker is part of a series that were the inspiration of Joseph Hampton Rich, a North Carolina native. Rich was a newspaper man from Mocksville and an advocate for highways. He founded the Boone Trail Highway and Memorial Association in 1913 apparently in an effort to gain recognition for highways and to launch a project to memorialize the development of roads by building commemorative markers. He may have erected more than 300 monuments from the east to west coasts of the U.S. over a twenty-year period. During the same period, Rich published and was the editor of the Boone Trail Herald, a serial newsletter that chronicled the development of the marker program.

Many of the monuments contain the metal tablet inset, some with the Indian Head and others with a bas-relief of Daniel Boone and his dog (see the Daniel Boone Trail Marker in Hillsborough). The markers are generally referred to as the Daniel Boone Trail. The tablets have an inscription indicating that they contain metal recovered from the U.S.S. Maine.


The marker at UNC-Pembroke also has the image of a bison on the rear face, possibly a reference to the idea that trade routes developed out of old bison paths and became the location of trade routes used by both white traders and Native Americans. The use of the Indian head and the bison, without the plaque of Daniel Boone, may reflect the history of UNC-Pembroke with its beginnings in 1887 as the Croatan Normal School, created by the North Carolina General Assembly for the training of Native American Public School teachers. The state legislature changed the name in 1911 to the Indian Normal School of Robeson County and again in 1913 to the Cherokee Indian Normal School of Robeson County. In 1941, the name was again changed to Pembroke State College for Indians and then to Pembroke State College in 1949. The UNC-Pembroke yearbook is called The Indianhead.

Location: The monument is located directly in front of the Old Main building on Old Main Road (also known as West Railroad Street) in Pembroke.

Former Locations: The Arrowhead Marker has been moved twice since it was erected. It was originally located on the Quad between Old Main and Sampson Hall.

Landscape: The marker sits in a rectangular lawn area in the brick walkway in front of the building and is several steps from the Statue of Hamilton McMillan.