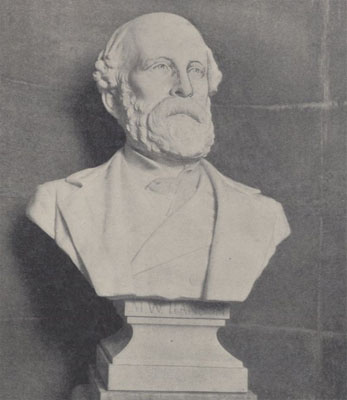 Description: This marble bust of the former Confederate general and North Carolina state senator, Matt Whitaker Ransom, wears a shirt with a high collar, coat, and suit. The bearded Ransom turns his head slightly to the left, appearing to look into the distance. The bust was commissioned by the North Carolina Historical Commission and is situated in the rotunda of the State Capitol building in Raleigh, North Carolina.

Inscription:
NO MAN IS FIT TO BE ENTRUSTED WITH CONTROL OF THE / PRESENT WHO IS IGNORANT OF THE PAST; AND NO / PEOPLE WHO ARE INDIFFERENT TO THEIR PAST NEED / HOPE TO MAKE THEIR FUTURE GREAT

Location: The bust is located in the southeast part of the rotunda inside the State Capitol on the first floor of the building. The bust of Matthew Whitaker is near a plaque, an open passageway into the rotunda, and the bust of John Morehead.

Landscape: The bust is located inside the State Capitol building in Raleigh.