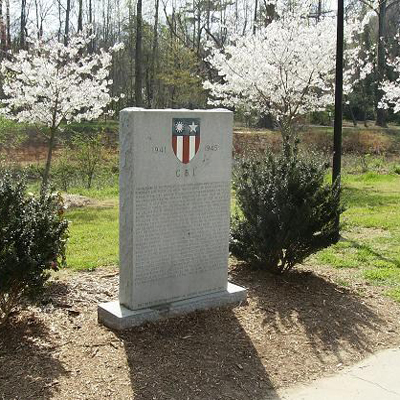 Description: This marker commemorates the service of American military personnel in the China-Burma-India Theater of World War II. It is composed of a rectangular granite slab, approximately four feet tall by three feet wide, with the red, white, and blue shoulder sleeve insignia of the China-Burma-India forces of the United States Army Air Forces. Below the insignia, the granite has a long inscription commemorating the comprehensive efforts of those involved in this area of military effort in World War II, considered by many a forgotten effort. Remembrances of pilots, flight mechanics, ground troops, engineers, communication units, cargo squadrons, and nurses and doctors are among the commemorations. The rear of the marker bears a shorter inscription.

Inscription:
Front: 1941 [insignia] 1945 / CBI / THE MEMBERS OF THE METROLINA BASHA CHINA-BURMA-INDIA VETERANS ASSOC. / REMEMBER WITH HONOR THE
VALOR AND SACRIFICE OF THEIR COMRADES WHO / SERVED IN
THE CBI THEATRE IN WORLD WAR II. THEY REMEMBER
THE PILOTS / AND CREWS WHO FLEW THE HIMALAYA MOUNTAINS,
"THE HUMP" FROM THE ASSAM / AIRBASES IN
EAST INDIA WITH VITALLY NEEDED SUPPLIES FOR THE CHINESE /
NATIONALIST FORCES AND THE AMERICAN AIR
FORCES IN CHINA. THEY REMEMBER / THE GALLANT MEN OF
MERRILL'S MARAUDERS WHO PENETRATED JAPANESE - HELD /
BURMA AND FOUGHT FEROCIOUSLY IN A SAVAGE JUNGLE TO
DEFEAT THE ENEMY / AND SECURE VITAL LAND AND AIRBASES
TO CARRY THE WAR CLOSER TO JAPANESE / TERRITORY. THEY
REMEMBER THE PILOTS AND CREWS OF THE BOMBER
SQUADRONS / WHO DELIVERED THEIR DEADLY CARGO TO THE
ENEMY AND THE GROUND CREWS WHO / KEPT THE PLANES
FLYING. THEY REMEMBER THE FLYING TIGERS WHO HELD
THE / ENEMY AT BAY FOR SEVERAL MONTHS BEFORE THE
UNITED STATES ENTERED THE FIGHT AND THEIR DESCENDANT
FIGHTER SQUADRONS THROUGHOUT THE CBI WHO /
RENDERED IMPORTANT SERVICE IN STRAFING AND BOMBING
MISSIONS AND KNOCKING / THE ENEMY FROM THE SKIES.
THEY REMEMBER THE LIFE-SAVING DOCTORS AND THE /
BRAVE WOMEN OF THE NURSING CORPS WHO BROUGHT
TENDERNESS AND LOVING / CARE TO SICK AND WOUNDED SOLDIERS.
THEY REMEMBER THE MEN WHO WORKED ON / AND
DROVE SUPPLIES OVER THE LEDO-BURMA ROAD TO CHINA.
THEY REMEMBER THE / MEN OF THE OSS IN BURMA, THE
AIR COMMANDO UNITS THE COMBAT CARGO AND
TROOP CARRIER SQUADRONS / THE SEARCH AND RESCUE
UNITS, THE COMBAT ENGINEERS / THE SIGNAL CORPS AND THE COMMUNICATIONS UNITS AND THEY REMEMBER
ALL / THEIR OTHER COMRADES WHO WORKED ON THE FLIGHT
LINES THE DOCKS THE / PIPELINES IN OPERATIONS OFFICES
AND THE FILTHY JUNGLE MANY HAD TO / LIVE AND FIGHT
IN AS COMPATRIOTS IN THE CAUSE OF LIBERTY FOR ALL MANKIND /
ERECTED BY THE METROLINA BASHA C.B.I. VETERANS ASSOCIATION JAN 2000


Rear: "WHEN YOU GO HOME / TELL THEM OF US AND SAY / FOR THEIR TOMORROW / WE GAVE OUR TODAY." / QUOTE FROM A MEMORIAL IN THE BRITISH / MILITARY CEMETERY, KOHIMA BATTLEFIELD / NAGALAND PROVINCE, INDIA

Subject notes: Operations in the Southeast Asian theater of China, Burma, and India in World War II grew out of the United States' decision in 1941 to aid China's war against Japan following Japan's invasion of China in 1937. The term "CBI" was used to designate this operational effort which began prior to the official entry of the U.S. into the war. Military efforts in this area included supporting China, Burma, and India against Japanese invasion by building roads and pipelines to transport supplies and conducting military offensives on the ground and from the air. The U.S. operations were lead by Lt. General Joseph W. Stilwell. Among the operational units recognized by the monument, it specifically recalls the efforts of the Flying Tigers and Merrill's Marauders.

Landscape: The monument sits in the grass just off the paved walking path and is flanked by low evergreen shrubs. The park's wooded areas are several feet behind the monument.