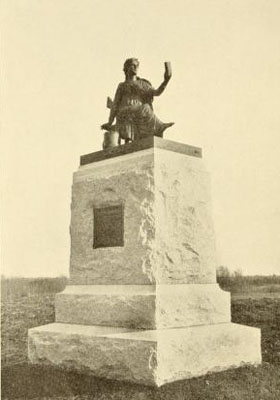 Clio
The Muse of History [Removed], Guilford Courthouse
View complete article and references at Commemorative Landscapes of North Carolina at: https://docsouth.unc.edu/commland/monument/134
Description: A cast statue of a classically-clad Clio sits with her right leg crossed over her left. Her left hand holds a text in the air; next to her sits a container filled with scrolls.
Morehead explained the need for the monument thus "The propriety of erecting a monument to Clio on our grounds suggested itself to me from these reasons: The necessity of a knowledge of history by every truly wise man and the importance of teaching the same. The Battle Ground enterprise has proven not only a Mecca wither the patriotic assemble, but also a source whence a tremendous influence has gone forth arousing our people to study of and pride in the State's Revolutionary history."
Inscription:
As sinking silently to night, / Noon fades insensibly, / So truth's fair phase assumes the haze / And hush of history. / But lesser lights relieve the dark, / Dumb dreariness of night, / And o'er the past historians cast / At least a stellar light.
Dedication date: 7/3/1909
Creator: The W.H. Mullins Company, Supplier Bureau Brothers, Bronze Statuary and Founder, Foundry
Materials & Techniques: The sculpture was cast in 32 ounce copper with an oxidized antique bronze finish by the W. H. Mullins Company. The company also produced the plaque below her.
Cost: $The statue itself cost $550; the plaque was $60. Both are from Bureau Brothers, Bronze Statuary and Founder.
Unveiling & Dedication: On July 3, 1909, Professor of Literature Charles Alphonso Smith (1864-1924) gave the dedication speech on "the significance of history in a democracy."
Subject notes: Clio, the muse of history, was one of the nine muses. She was the daughter of Zeus and Mnemosyne. Her name is derived from the Greek verb kleo, which means 'to make famous' or 'celebrate'. Clio was typically represented as holding an open scroll, or seated beside a chest of books. Their was consideration of having her standing at one point.
Controversies: The original plaque was missing the "r" in stellar. Bureau Brothers sent a letter to insert if possible.
The statue was deemed in bad taste and removed by the National Park Service.
Former Locations: Clio was removed in 1937 as she was unrelated to the park. On September 1, 1942, the statue was donated to be melted down for the war effort. Multiple other monuments, including the Davidson and Nash Arches, were also removed at the same time.
Landscape: Clio was the first in a line of seven monuments that once stood along a line along the Old Battle Ground Road (now a walking path). In under 500 feet visitors would have passed seven monuments. Only one of the original seven remains. To the east of Clio one would have walked down the road past the Battle of Alamance monument, the James Hunter Monuments, The Battle of Kings Mountain Monument, the David Schenck monument and Joseph Morehead statue before finally reaching the Caldwell marker. Of these seven monuments only the Caldwell remains in its original location. The others have since been moved or destroyed. The former location of many of these monuments is now overgrown. This main-street of monuments would have been the center of memorization in an American "Mecca" the creators hoped to build. Before 1937, when Clio was removed, at least 13 monuments were within 500 feet of the Muse's location.The Battle Monument, the Davidson and Nash Arches (all since removed) as well as the Greene Monument would also have been visible from Clio's location. For the original locations of all the removed and relocated monuments see G.E. Sisson's map.
City: Greensboro
County: Guilford
Subjects: Historic Women Figures,Removed Monuments
Latitude:
36.13252
Longitude:
-79.84464
Subjects:
Monuments
Places
Authors:
Commemorative Landscapes of North Carolina
Origin - location:
Guilford County
Greensboro
From:
Commemorative Landscapes of NC, University of North Carolina Chapel Hill.