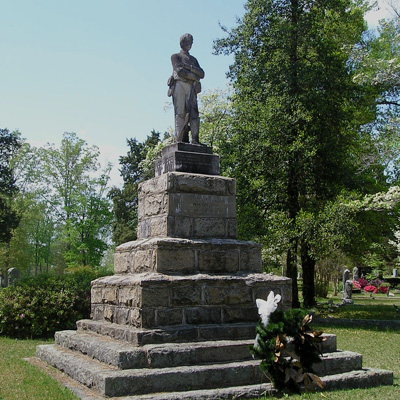 Confederate Dead of Warren County
Warrenton
View complete article and references at Commemorative Landscapes of North Carolina at: https://docsouth.unc.edu/commland/monument/54
Description: A marble statue of a Confederate soldier stands on a granite pedestal. A young mustachioed soldier, at ease resting against a tree trunk and leaning on his rifle, looks forward and downward with his hat in his hand.
Inscription:
BRAVE AND FEARLESS / PROUD AND PEERLESS / WERE WARREN'S SONS WHO WORE THE GRAY / ERECTED BY THE MEMORIAL ASSOCIATION OF WARREN COUNTY / TO THE CONFEDERATE DEAD OF WARREN COUNTY NC / ERECTED BY THE EFFORTS OF MRS. LUCY E POLK
Dedication date: 8/27/1903
Creator: Cooper Bros. of Raleigh, Designer Harry Demptser, Sculptor
Materials & Techniques: White Carrara Marble statue, granite base.
Sponsor: The Ladies Memorial Association of Warren County, Lucy Polk (president)
Unveiling & Dedication: Walter A. Montgomery was the keynote speaker. Montgomery delivered a lengthy address honoring his fellow Warren County Confederates, applauding the devotion of women to the Confederate cause then and since, and justifying the logic of secession and the honor of the Confederate cause. Tasker Polk (March 24, 1861 - July 5 1928) read a poem at the dedication.

Montgomery was born in Warrenton in February of 1845, served in the 12th North Carolina Regiment during the Civil War, was promoted to 2nd Lieutenant in 1864, and was paroled at Appomattox Courthouse. He was admitted to practice law in 1867. In 1873, he moved to Memphis, TN, but returned to North Carolina in 1876. In 1894, he was elected to the NC Supreme Court to fill an unexpired term for two years, and in 1896, he was elected for the full term of eight years. On its expiration, he returned to his private practice.
Landscape: Located in Fairview Cemetery
City: Warrenton
County: Warren
Subjects: Civil War
Latitude:
36.40165
Longitude:
-78.16368
Subjects:
Monuments
Places
Authors:
Commemorative Landscapes of North Carolina
Origin - location:
Warren County
Warrenton
From:
Commemorative Landscapes of NC, University of North Carolina Chapel Hill.