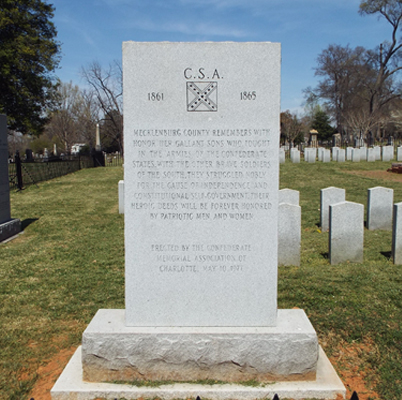 Confederate Soldiers Monument
Charlotte
View complete article and references at Commemorative Landscapes of North Carolina at: https://docsouth.unc.edu/commland/monument/340
Description: Standing approximately six feet tall and weighing 2,000 pounds, this monument is composed of a rectangular block of granite resting atop a smaller granite base. The face of the monument is smooth with an inscription honoring Charlotte's Confederate soldiers and bears the engraved image of the Confederate Battle Flag beneath the initials "C.S.A", for the Confederate States of America. The face of the granite on the top and sides has been left rough.
Inscription:
C.S.A. / 1861 / [engraving of the Confederate Battle Flag] / 1865 / MECKLENBURG COUNTY REMEMBERS WITH / HONOR HER GALLANT SONS WHO FOUGHT / IN THE ARMIES OF THE CONFEDERATE / STATES WITH THE OTHER BRAVE SOLDIERS / OF THE SOUTH. THEY STRUGGLED NOBLY / FOR THE CAUSE OF INDEPENDENCE AND / CONSTITUTIUONAL SELF-GOVERNMENT. THEIR / HEROIC DEEDS WILL BE FOREVER HONORED / BY PATRIOTIC MEN AND WOMEN. / ERECTED BY THE CONFEDERATE / MEMORIAL ASSOCIATION OF / CHARLOTTE. MAY 10, 1977
Dedication date: 5/10/1977
Materials & Techniques: Granite
Sponsor: The Confederate Memorial Association of Charlotte
Cost: $706
Subject notes: Charlotte contributed soldiers to the war effort, including the entire class of cadets from the North Carolina Military Institute, founded in Charlotte in 1859, and Confederate generals James. H. Lane and Charles C. Lee. Charlotte also supplied the Confederate war effort with armaments and other naval equipment manufactured at the Confederate Naval Yard and the Mecklenburg Gun Factory. The Naval Yard had been relocated from its original location in Norfolk, Virginia in 1862 to protect its operations and to strategically position it along rail lines. Confederate President Jefferson Davis was sheltered briefly in Charlotte in April of 1865, along with his family and some members of the Confederate Cabinet and the remains of the Confederate Treasury, in his attempt to preserve the crumbling Confederacy following the Fall of Richmond and Lee's surrender at Appomattox on April 9, 1865.
Controversies: Controversy occurred during the planning and approval process. The monument was placed in front of the Old City Hall apparently without the prior knowledge and approval of at least one council member, Harvey Gantt.
J. Larry Walker, Jr. had raised $706 dollars from veterans and historical societies to have the marker created and it was reportedly believed by him to have been approved by the city. The City Manager's Office subsequently said neither the monument nor its location on public property had been approved. At a city council meeting just a few days before the planned unveiling ceremony in May of 1977 and with the monument already having been installed on the lawn by its sponsor, both Walker and his wife expressed their ire at the bureaucracy and their belief in their right to dedicate a public monument to the Confederate heritage. City councilman Harvey Gantt, who had not been informed of the monument, was vocal at the May 16, 1977 meeting both in his sympathy for the frustrated Walkers but also in his stance on the inappropriateness of the site for the monument given the history of the city, its African American residents, and the Confederacy's fight to preserve the institution of slavery.
Harvey Gantt is an African American, a Democratic politician, and leader of progressive community initiatives in Charlotte and North Carolina. He served on the Charlotte City Council in the 1970s and 1980s prior to serving two terms as the City's first African American mayor. He subsequently made two unsuccessful bids for the United States Senate, losing to Republican Jesse Helms.
After the 2015 racially motivated mass murder of nine people at the Emanuel African Methodist Episcopal Church in Charleston, South Carolina, there was a call nationally for Confederate monuments to be removed. In response to that the N.C. Legislature passed a law signed by Governor Pat McCrory that prevents state and local government from removing an “object of remembrance” located on public property that commemorates a historical event. After the Charleston murders the Confederate Soldiers monument had been spray painted with the word “racist.” It had been removed for cleaning prior to the law being passed but not replaced on the old Courthouse grounds. This technicality allowed for Charlotte City Manager Ron Carlee to have the marker relocated to the Confederate section of Elmwood Cemetery with a grouping of other Confederate memorials.
Former Locations: The monument was originally located just off the northwest corner of the Old City Hall on the South Davidson Street side of the building. The front of the monument faced west. The memorial was surrounded by mature trees.
Current Location: The monument stands in the Confederate section of Elmwood Cemetery off West 6th Street. This section is located just to the north of the west side of the first circular road after the entrance to the cemetery where the loop meets the second circular road. Five markers honoring local Confederate regiments, the Mecklenburg County Confederate Monument, the Confederate Navy Yard marker and a memorial for the D.H. Hill School stand in the same Confederate section of the cemetery. The Confederate Navy Yard marker and D.H. Hill School memorial like the Mecklenburg County Confederate Soldiers marker were originally placed at different locations.
Landscape: The monument sits in a manicured lawn surrounded by small stone grave markers of Confederate veterans and the entire site is surrounded by a low gridiron fence.
City: Charlotte
County: Mecklenburg
Subjects: Civil War
Latitude:
35.22251
Longitude:
-80.83835
Subjects:
Monuments
Places
Authors:
Commemorative Landscapes of North Carolina
Origin - location:
Mecklenburg County
Charlotte
From:
Commemorative Landscapes of NC, University of North Carolina Chapel Hill.