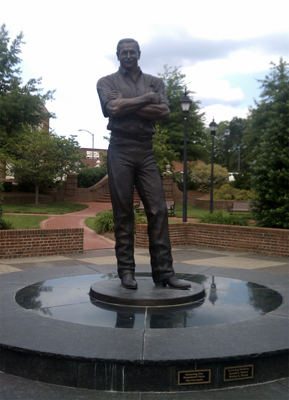 Dale Earnhardt Statue
Kannapolis
View complete article and references at Commemorative Landscapes of North Carolina at: https://docsouth.unc.edu/commland/monument/69
Description: This 9 foot tall, 900-pound bronze statue of Dale Earnhardt is clad in jeans, cowboy boots and a short-sleeved shirt. His arms are crossed on his chest in an apparently jovial gesture. The statue of the NASCAR driver stands in the middle of a circular granite base. Two small plaques sit on the front of the base. This monument is a work in progress, as there are plans to add 76 granite sections, one for each of his Winston Cup wins. Plans also include the installation of benches and plants around the plaza, many of them with the number 3 (Earnhardt's racing number) incorporated into them. The city of Kannapolis began planning a memorial to Earnhardt in May 2001.
Inscription:
Left plaque on base: Honoring Our / Hometown Hero / City of Kannapolis
Right plaque on base: In Loving Memory / Gerald L. Moore / Wesley A. Moore
Image of plaques
Dedication date: 10/14/2002
Creator: Clyde Ross Morgan, Sculptor
Materials & Techniques: Bronze statue, granite base
Sponsor: David Murdock
Cost: $200000
Post dedication use: To help fund the remainder of the planned design, the city of Kannapolis has began selling non-commercial brick inscriptions on the site.
Subject notes: Dale Earnhardt, Sr., (April 29, 1951 "Ã February 18, 2001) was a famous NASCAR driver from Kannapolis, NC who won seventy-six races. Earnhardt died in the final lap of the 2001 Daytona 500.
Location: The statue is located in the Dale Earnhardt Plaza, a part of the Cannon Village shopping center off of South Main Street between West A and West B streets.
City: Kannapolis
County: Cabarrus
Subjects: Historic Cultural Figures,Historic Sports Figures
Latitude:
35.49687
Longitude:
-80.62504
Subjects:
Monuments
Places
Authors:
Commemorative Landscapes of North Carolina
Origin - location:
Cabarrus County
Kannapolis
From:
Commemorative Landscapes of NC, University of North Carolina Chapel Hill.