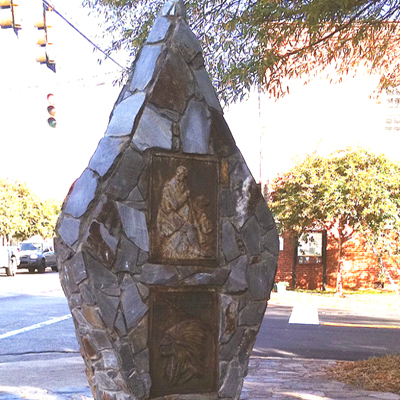 Daniel Boone Trail Marker
Hillsborough
View complete article and references at Commemorative Landscapes of North Carolina at: https://docsouth.unc.edu/commland/monument/287
Description: The monument is shaped in the form of an arrowhead, and the surface has been covered in a mosaic of natural field stones matching the stone sidewalk surrounding the site. One side bears an inscribed bronze plaque; the other side bears two bronze images, a relief image of Daniel Boone and his dog and a relief image of a Native American chief. The inscriptions on both sides of the monument indicate that metal in the bronze came from the U.S.S. Battleship Maine.
Inscription:
North face: FROM THIS SPOT WHERE STOOD THE / OLD STATE HOUSE, / WAS AN EXPEDITION OF / FRONTIERSMAN UNDER / COL. RICHARD HENDERSON, / FOR KENTUCKY, LED BY / DANIEL BOONE / MARCH 17, 1776 / "AND THEY MARCHED AWAY SOLEMNLY AS / IF GOING TO THE ENDS OF THE WORLD" / NEAR BY ARE BURIED: / 1 SIGNER OF THE DECLARATION OF INDEPENDENCE / 2 GOVERNORS, 2 CHIEF JUSTICES / IN TABLET IS METAL OF U.S.S. MAINE
South face:
Inscribed above and below figure of Daniel Boone: BOONE TRAIL HIGHWAY / METAL FROM BATTLESHIP MAINE IN TABLET / DANIEL BOONE
Inscribed above the figure of a Native American Chief: HERE PASSED / THE TRADING PATH / 1700
Image
Dedication date: circa 1920s to 1930s
Subject notes: The Hillsborough Daniel Boone and Old Trading Path Marker are part of a series of markers placed in a number of states to memorialize Daniel Boone and the pioneer spirit. They were the inspiration of Joseph Hampton Rich, a North Carolina native. Rich was a newspaper man from Mocksville and an advocate for highways. He founded the Boone Trail Highway and Memorial Association in 1913 apparently in an effort to gain recognition for highways and to launch a project to memorialize the development of roads by building commemorative markers. He may have erected more than 300 monuments from the east to west coasts of the U.S. over a twenty-year period. During the same period, Rich published and was the editor of the Boone Trail Herald, a serial newsletter that chronicled the development of the marker program. The inscriptions in the bronze plaques indicate that the metal came from the battleship the U.S.S. Maine.
Location: The monument sits on the northwest corner of the green in front of the Old Courthouse square in Hillsborough at the intersection of South Churton Street and King Street. The inscribed side faces north and the intersection. The south side, with the images of Daniel Boone and the Native American Chief, faces the courthouse.
Landscape: The monument sits at the edge of the grass in front of the courthouse where it meets the sidewalk. The sidewalk and the monument are both constructed in a mosaic of natural field stones. There are large old oaks shading the site.
City: Hillsborough
County: Orange
Subjects: Geography,Historic Civic Figures,Industry
Latitude:
36.07539
Longitude:
-79.0994
Subjects:
Monuments
Places
Authors:
Commemorative Landscapes of North Carolina
Origin - location:
Orange County
Hillsborough
From:
Commemorative Landscapes of NC, University of North Carolina Chapel Hill.