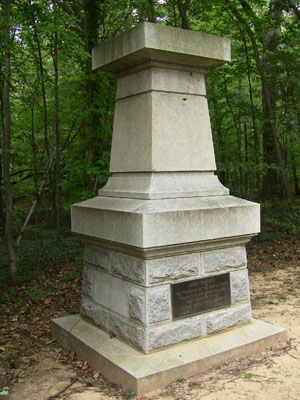 Description: This truncated granite column stands approximately eleven feet tall and is dedicated to one of the early preservers of the Guilford battleground.

Inscription:
DAVID SCHENCK /
THE PROJECTOR OF THIS BATTLE FIELD'S /
RECLAMATION AND THE ORGANIZER AND /
FIRST PRESIDENT OF THE /
GUILFORD BATTLE GROUND COMPANY /
1835 - 1902

Subject notes: David Schenck is the man who conceived the idea of preserving the Guilford Battlefield; he later served as the first president of the Guilford Battleground Company. After Schenck's death in 1902 the Company adopted resolutions the following year to have a monument built in his honor.

Location: The marker is on Guilford Courthouse Tour Road 0.2 miles east of Old Battleground Road, on the right when traveling west.

Former Locations: Originally along the New Garden Road (now a walking path), the monument was moved to its present location in 1937.