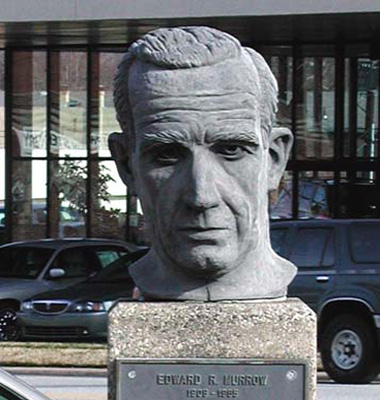 Description: A stylized bust of the broadcasting pioneer Edward R. Murrow stands on the northeast grounds of the Greensboro Historical Museum. Murrow was a Greensboro native who attained global recognition as an investigative reporter and television newsman. The bust, which was originally located on private property, sits atop a granite pedestal and stands at chest-height with the onlooker.

Subject notes: Edward R. Murrow (1908 - 1965), a native of Guilford county, gained national recognition as a radio news broadcaster reporting on World War II and later became a pioneer of television newscasting. Murrow was based in London for most of his career and he became the director of CBS's European operations. He received the Peabody award on multiple occasions and was honored with the Presidential Medal of Freedom in 1964. Queen Elizabeth II made him an Honorary Knight Commander of the Order of the British Empire just before his death in 1965.

Controversies: "Salvaging the bust became a local cause last month after Greensboro lawyer Joel Bowden announced plans to mothball the piece to make room for a business sign on his property. Bowden owns the office building in front of which the bust had stood since its dedication in 1971 ... Hundreds of people bombarded Bowden's office with complaints, several of whom promised to take the statue off the lawyer's hands. In the end, Bowden agreed to donate the work to the historical museum." - Greensboro News and Record 1998

Former Locations: Monument was relocated from the corner of Friendly Avenue and Murrow Boulevard to the Greensboro Historical Museum grounds at 130 Summit Avenue.