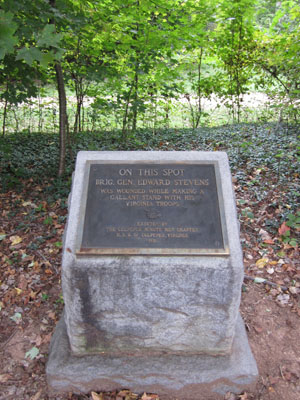 Edward Stevens Monument
Guilford Courthouse
View complete article and references at Commemorative Landscapes of North Carolina at: https://docsouth.unc.edu/commland/monument/136
Description: This granite base and podium-shaped block commemorates Edward Stevens of the Virginia Troops, who was wounded in the battle here. There is a bronze plaque laying on a slant at the top of the monument with an inscription. The monument measures 2'6" in height and 2'4" in width.
Inscription:
ON THIS SPOT / BRIG. GEN. EDWARD STEVENS / WAS WOUNDED WHILE MAKING A / GALLANT STAND WITH HIS / VIRGINIA TROOPS / ERECTED BY / THE CULPEPER MINUTE MEN CHAPTER / D.A.R. OF CULPEPER, VIRGINIA / 1934
Dedication date: 10/15/1931
Materials & Techniques: Granite and bronze.
Sponsor: Culpeper Minute Men Chapter Daughters of the American Revolution
Subject notes: General Edward Stevens was the commander of the Virginia militia on the battlefields second line. Born in 1745 in Culpepper County, Virginia, he served in many Revolutionary War battles including Brandywine, Germantown, Camden, Guilford (where he was wounded), and Yorktown. He later served eight years in the Virginia Legislature.
Landscape: This monument is located on New Garden Road, right after the intersection of Old Battleground Road, near one of the parking lots in the park.
City: Greensboro
County: Guilford
Subjects: Revolutionary War
Latitude:
36.13298
Longitude:
-79.84546
Subjects:
Monuments
Places
Authors:
Commemorative Landscapes of North Carolina
Origin - location:
Guilford County
Greensboro
From:
Commemorative Landscapes of NC, University of North Carolina Chapel Hill.