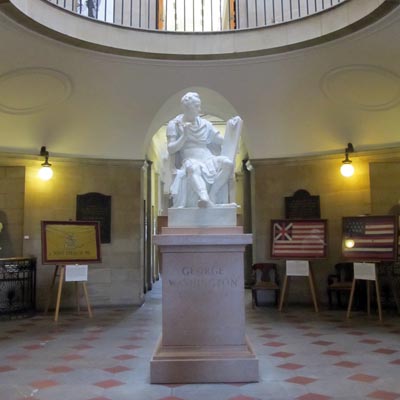 Description: In this slightly larger than life size white marble sculpture, George Washington is depicted as a Roman general, demonstrating youth, strength, and studied grace. In the romanticized neoclassical rendering, he is seated in a relaxed and confident pose, holding a quill in his right hand and contemplating what he has inscribed on the tablet perched on his left leg. The statue, showing black veins in the marble, rests on a 5 foot tall polished pink granite plinth which bears the inscription to Washington and the sculpture's creator, Antonio Canova.

Dedication date: The original marble sculpture was dedicated on December 24, 1821. The plaster replica was received in 1910 at the Hall of History, and the marble duplicate of the original arrived in Raleigh in 1970.

Sponsor: The State of North Carolina sponsored the original 1821 sculpture and the contemporary replacement. The plaster replica was a gift from the Italian government.

Subject notes: The original monument to Washington, rendered in marble, was installed in the Hall of the Senate on December 24, 1821. At the urging of Thomas Jefferson, Antonio Canova was selected to sculpt the figure, with the model for the head provided from a bust of Washington created by Guiseppe Cerrachi (although one account suggests the head was sculpted from a bust by Jean-Antoine Houdon). Jefferson recommended the selection of Canova and the neo-classical portrayal, apparently to keep up with contemporary European fashion and artistic taste and based on his opinion that no American sculptor was up to the task. In a letter to Nathaniel Macon, North Carolina Senator, Jefferson expressed his opinion that a more realistic interpretation, such as that of his contemporary, French sculptor Jean-Antoine Houdon who had sculpted the busts of a number of Revolutionary statesmen including Washington, would not do: "our boots and regimentals have a very puny effect" he wrote (Connor, p. 24). The original sculpture traveled from Europe on the U.S. Navy war vessel The Columbus where it arrived in Boston and was transferred to another ship for transport to the port of Wilmington. After reaching Wilmington, it traveled by barge up the Cape Fear River, making the final part of the journey over land by mule train and arriving in Raleigh on December 24, 1821. It was installed in the Capitol on a large marble pedestal with ornate bas-relief carving.


The sculpture had a brief life of ten years in the State House which burned on June 21, 1831, leaving the sculpture mostly ruined. It was kept on view in the State Hall of History for some time, with an unsuccessful effort made at one point to restore it. Following the destruction of the sculpture in the fire and rebuilding of the Capitol in 1833, efforts began to replace the Canova statue with another. In 1857, the Town of Edenton sponsored a replacement with approval of the legislature to place the statue on the grounds of the Capitol building. The replacement, the 1857 statue of George Washington, was a substantial departure from the romantic and idealized Washington of Canova. Instead, it was a bronze replica of a statue by Houdon from the 1790s which depicted Washington with quiet realism, naturalism, and maturity, dressed in his military uniform but carrying a civilian walking stick. The original of Houdon's sculpture was commissioned by the Virginia legislature from a bust he had completed of Washington in the 1780s and placed in the rotunda of the state Capitol in Richmond in 1796. This was likely the statue Jefferson had in mind when he recommended Canova. Ironically, Thomas Jefferson had apparently recommended Houdon to Virginia's governor Benjamin Harrison during his time as the American minister to France in the late 1780s.


In 1908, the original model for the Canova sculpture was discovered at the Canova Museum in Possagno, Italy, and in 1910 a plaster replica was received in Raleigh as a gift from the Italian government. In 1925 the General Assembly appointed a commission, to be headed by R. D. W. Connor, to secure a new marble replica of the original sculpture. The commission had authority to obtain the replacement, with the cost born by private donations and subscriptions. The project was never realized until 1963, when the State began an effort to have the statue once again produced in marble. In 1970, Venetian sculptor Romano Vio produced a marble carving from the original cast, and it was installed atop the pink granite plinth in the rotunda.


The Marquis de Lafeyette visited the statue (the plaster casting) on a trip to Raleigh in 1825.

Controversies: Thomas Jefferson's opinions about the unsuitability of an American sculptor and his European tastes for the design were not universally accepted. In his 1910 history of the sculpture, on the occasion of the gift of the plaster replica from the Italian government, R. D. W. Connor alluded to public displeasure with the romanticized and Romanized depiction of Washington, writing, "There were not wanting those, when the statue was first brought to America, who sharply criticized the sculptor for Romanizing the American general, declaring it to be a better statue of Julius Caesar than of George Washington" (Connor, p. 11).

Location: The sculpture sits in the center of the Capitol rotunda.

Landscape: The sculpture is located in the center of the North Carolina State Capitol. The interior of the rotunda houses other State Capitol memorials including statuary, paintings, and plaques commemorating significant events and individuals in North Carolina's history.